Skip to content
Home / A Samaritan, Pastor and a Jewish Woman get on a Shuttle

A Samaritan, Pastor and a Jewish Woman get on a Shuttle

A Samaritan, Baptist Pastor and a Jew get on a Shuttle

I know it sounds like the beginning of a bad joke, but this is a true story, I have the shuttle receipts and I know I left a memorable impression on the folks on this ride.  Here’s how the story goes…

it was about a year before the “pandemic” hit and people were still freely traveling, I had contracted a shuttle as I was going to be out of town for a few days and it arrived at the dark hours of the morning to take me to Sky Harbor here in Phoenix. As I boarded I sized up our driver as I was the first one on, he was a big guy, much like me and I knew we’d have a great conversation.

We were talking about food initially and some favorites near this time of year and I casually mentioned that I quit eating pork overall and had also quit shellfish. This peeked his interest and we spoke further, some of the things that I had become concerned about were quite obvious to me, the comparison of “trash eaters” to these animals/aquatic creators was something that bore more investigation and on searching finding that indeed these things were rife with parasites had me swear them off.

That initial search was instantiated by reading Leviticus 11 where we read what Yahuah considers food, you won’t find any of those above mentioned creatures there and for me, although sad having been raised by a Texas dad who loved his sausages and a PNW mom who loved her shrimp, I had to part with these things. To this day, I’ve maintained that choice and actually have felt better (although selections quickly dwindle when you realize that America has a pork addiction). We read in Leviticus 11

It goes on to speak of fish with scales as acceptable food as well, so that rules out shellfish.  On comparison it’s interesting that the cockroaches on land are very similar in shape to the cockroaches in the sea…just sayin, most of these creatures are garbage crew eaters, eating dead things (that includes swine) that you just don’t want to put in your system. There’s interesting arguments made about the vision in Acts about various foods being “now ok” but that context was all about various “people” being ok. So don’t be sucked into that false teaching. I know a lot of churches/fellowships teach the law is done away, but in Yeshuah’s own words (Matt 5:16-19) none of the law is done away until ALL is fulfilled. There’s still 1/3 of prophecy on judgement and end times found in the OT that hasn’t come to culmination. So buckle up the commands in the instructions still apply today. 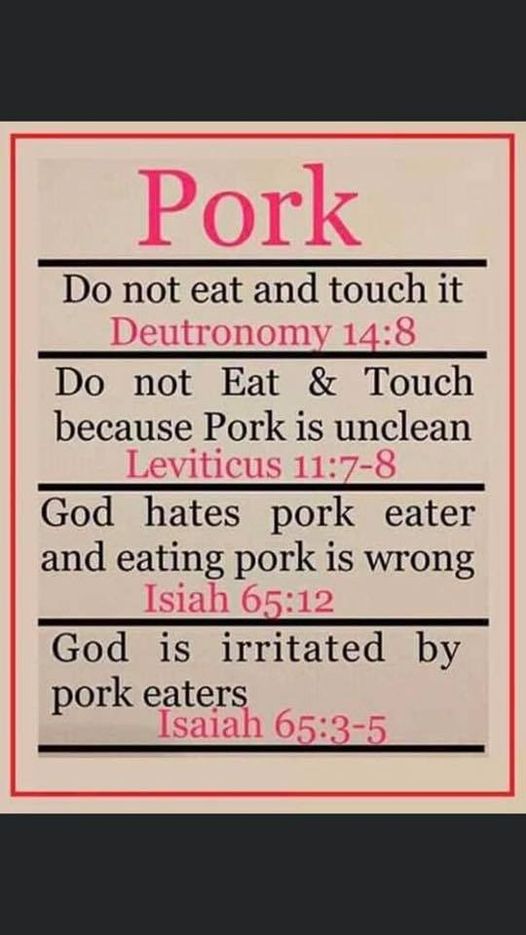 So as we spoke he found that interesting and we carried the conversation further, he understood some churches actually teach this and we began talking about Sunday vs. Sabbath worship and how most churches ignore the 4th commandment, which calls us to set apart that day and spend time with our Father in his creation and all He has done.

About that time we picked up a new rider, the driver was very excited about the discussion so he asked the new rider if he minded if we spoke further on this, and the pastor puffed up and said, no, that’s great, I’m a pastor of XXXXXXX Baptist church here in Phoenix. Wow, talk about a shocker.

So as we continued speaking on the sabbath and further obedience, the pastor quickly interrupted and started quoting Paul from Galatians and other epistles. He asserted that Paul had preached a more perfect gospel and that we should be following that, and ignoring the words of Yeshuah…yes, you read that right. Ignoring the words of the Messiah. This sent up all my warning signals as this was indeed a wolf in sheeps clothing that was leading his whole flock to destruction.

As I refined my approach and spoke assertively that “the Word made flesh” (aka Yeshuah) is the Father’s Word and nothing supersedes this, he disagreed and there was no budging with him. So pray for the churches here in Phoenix and for that matter globally, there are many pastors just like this that disavow the words of our Messiah and walk in blatant disobedience.

About this time our last passenger got on board and she was a Jewish woman. This came out as we all excitedly asked if we could continue our discussion and wanted to make sure it would not offend her, not only did she say yes, she smiled as someone who has studied scripture and I knew we were going to have some fun.

I again reiterated my position about the Torah (first five books of scripture as the instructions) and the woman glowed. She knew I was a Torah keeper, who may believe in the Messiah Ben Yusef. This is a teaching in Judaism about the two facets of our Messiah, the first coming we saw Messiah Ben Yusef (son of Joseph) but they hold out hope for another Messiah, Messiah Ben David, (son of David) who will come and reign.

As we read in scripture this is all the same Messiah, but Rabbi’s have taught this is two distinct individuals (to their own fault) and as such, they dismiss the 1st one as a non-event, just another minor prophet not the Son of our Heavenly Father.

The pastor jumped in and tried to explain his point, but it fell flat as he was operating strictly from a NT study point of view which doesnt fly with anyone with a Hebrew background. As I mentioned, interjecting, I believe that Messiah Ben Yusef and Messiah Ben David are one and the same. The blank stare from the pastor showed he had no clue about Jewish teachings and silenced him immediately. I mentioned a channel I had discovered 2 years prior on Youtube called “A Rood Awakening” and the woman again glowed with a smile. “Yes, I’ve watched their shows, they are very accurate in what they portray”, she said. The pastor had lost the discussion and quietly listened as she and I discussed the aspects of the OT fulfillments and what we awaited.

I was the first one offloaded from what I remember and thanked everyone for their insights and contributions. I also mentioned to the pastor that I would indeed pray for him. He was a bit taken aback by someone professing Hebrew roots, but smiled politely. The woman was again all smiles and blessings, truly a marvelous soul and the driver was thankful for learning something that he claimed, “I’m going to go study this, this is something I never knew”.

As I mentioned in Thursday’s video, we have a story to tell, how well we tell it, and how we impact others is directly related to how much you learn from our Father. You can impact for good, or not, it’s your choice. I’m thankful that not only did I have the right words and studies under my belt, but also that not 1, but all 3 that got on that shuttle were eager for a discussion.  I call those opportunities, “divine appointments” that only our Father can setup for us.

So what do you do?

Study, pray, seek and you will find. I am thankful for every moment where all those years of study before I discovered the wrongs of the church were well spent. Now knowing the scriptures, I can tie them together and point out the obvious. I will look forward to that day to hear from Paul some of the words he spoke millennium ago and most of all to hear from our Messiah, well done, my good and faithful servant.

Please pray for more opportunities and that I would indeed be equipped to meet them.