Skip to content
Home / Why we have the Electoral College

Why we have the Electoral College 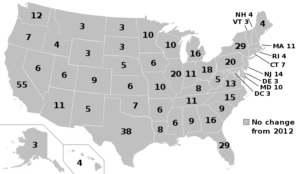 Claims that a candidate has won the popular vote, so they should be President are common.  The problem with that is if we side with popular vote, 3-4 states of the US would indeed take all the rest with it if they voted together.  So a popular vote is not the solution. 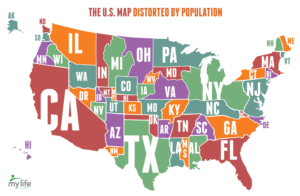 The electoral college was setup to allow small states to have an equal voice in the process regardless of the monolithic populated states like NY, TX, CA.  This helps everyone to have fair and valid representation.

If we were to redraw the map based on “population” you get the idea.  Criteria for districting is “equal population” and “equal mix”.  Those are the federal criteria.  This allows all areas to have equal impact.

Q: Why does the U.S. have an Electoral College?

A: The framers of the Constitution didn’t trust direct democracy.

Why does the United States have an Electoral College when it would be so easy to directly elect a president, as we do for all the other political offices?

When U.S. citizens go to the polls to “elect” a president, they are in fact voting for a particular slate of electors. In every state but Maine and Nebraska, the candidate who wins the most votes (that is, a plurality) in the state receives all of the state’s electoral votes. The number of electors in each state is the sum of its U.S. senators and its U.S. representatives. (The District of Columbia has three electoral votes, which is the number of senators and representatives it would have if it were permitted representation in Congress.) The electors meet in their respective states 41 days after the popular election. There, they cast a ballot for president and a second for vice president. A candidate must receive a majority of electoral votes to be elected president.

The reason that the Constitution calls for this extra layer, rather than just providing for the direct election of the president, is that most of the nation’s founders were actually rather afraid of democracy. James Madison worried about what he called “factions,” which he defined as groups of citizens who have a common interest in some proposal that would either violate the rights of other citizens or would harm the nation as a whole. Madison’s fear – which Alexis de Tocqueville later dubbed “the tyranny of the majority” – was that a faction could grow to encompass more than 50 percent of the population, at which point it could“sacrifice to its ruling passion or interest both the public good and the rights of other citizens.” Madison has a solution for tyranny of the majority: “A republic, by which I mean a government in which the scheme of representation takes place, opens a different prospect, and promises the cure for which we are seeking.”

As Alexander Hamilton writes in “The Federalist Papers,” the Constitution is designed to ensure “that the office of President will never fall to the lot of any man who is not in an eminent degree endowed with the requisite qualifications.” The point of the Electoral College is to preserve “the sense of the people,” while at the same time ensuring that a president is chosen “by men most capable of analyzing the qualities adapted to the station, and acting under circumstances favorable to deliberation, and to a judicious combination of all the reasons and inducements which were proper to govern their choice.”

In modern practice, the Electoral College is mostly a formality. Most electors are loyal members of the party that has selected them, and in 26 states, plus Washington, D.C., electors are bound by laws or party pledges to vote in accord with the popular vote. Although an elector could, in principle, change his or her vote (and a few actually have over the years), doing so is rare.

As the 2000 election reminded us, the Electoral College does make it possible for a candidate to win the popular vote and still not become president. But that is less a product of the Electoral College and more a product of the way states apportion electors. In every state but Maine and Nebraska, electors are awarded on a winner-take-all basis. So if a candidate wins a state by even a narrow margin, he or she wins all of the state’s electoral votes. The winner-take-all system is not federally mandated; states are free to allocate their electoral votes as they wish.

The Electoral College was not the only Constitutional limitation on direct democracy, though we have discarded most of those limitations. Senators were initially to be appointed by state legislatures, and states were permitted to ban women from voting entirely. Slaves got an even worse deal, as a slave officially was counted as just three-fifths of a person. The 14th Amendment abolished the three-fifths rule and granted (male) former slaves the right to vote. The 17th Amendment made senators subject to direct election, and the 19th Amendment gave women the right to vote.