What is CogCon and Why You Should Care

COGCON 4:  Federal executive branch government employees at their normal work locations. Maintain alternate facility and conduct periodic continuity readiness exercises.
COGCON 3:  Federal agencies and departments Advance Relocation Teams “warm up” their alternate sites and capabilities, which include testing communications and IT systems. Ensure that alternate facilities are prepared to receive continuity staff. Track agency leaders and successors daily.
COGCON 2:  Deployment of 50-75% of Emergency Relocation Group continuity staff to alternate locations. Establish their ability to conduct operations and prepare to perform their organization’s essential functions in the event of a catastrophic emergency.
COGCON 1:  Full deployment of designated leadership and continuity staffs to perform the organization’s essential functions from alternate facilities either as a result of, or in preparation for, a catastrophic emergency. 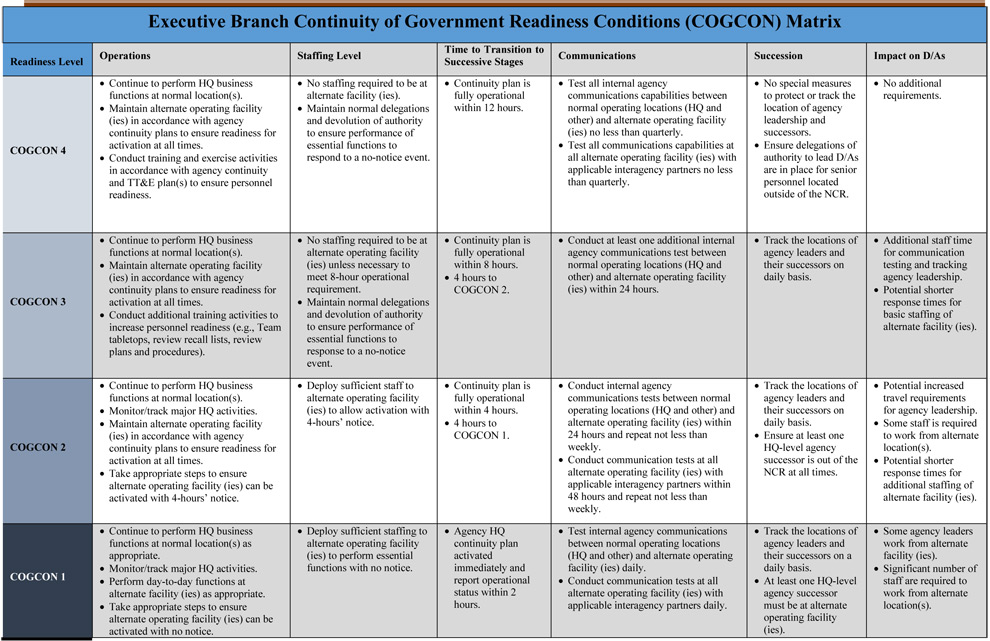 CogCon is the continuity of government in a time of disaster or foreign usurping of our leadership. CogCon was initially activated more than a year before January 6. On January 8 it was elevated to the next height, and finally on the last day, it was elevated to the top.  With that in mind, we need to understand that all of our key government agencies are operating “elsewhere” under other powers and that our government has not transitioned to someone else, but is instead still in the hands of the individuals prior to the election.

So what does this all mean? It shows that we had a plan and indeed it is in play keeping things in the hand of the “adults in the room” rather than the leftist petulant children. Their actions are part of this plan, to “educate” and “wake up” those that have been ignoring politics for decades.  Remember the old phrase, “you may not care about politicians, but they do care about you specifically your wallet”.  So now you’re seeing what happens when they are playing “Camp Run-A-Mok” supervised as part of a script so that others will finally understand.

It’s harsh, but it’s at least being controlled.  There will be casualties (commonly called Collateral Damage) which is unfortunate, but it has to be this way otherwise people will never understand what they were part of, unaware or not.

Study, dig, research, don’t take just our word for it, but investigate. When the big reveal comes and the reinstatement of our POTUS occurs (remember he never left) then we will indeed be in a better place.