Don’t bother reading the Moralmatters Reader’s commentary (below) if you are in denial of  “the depravity of human nature” and if you don’t believe that big government and the mainstream media propaganda whores do not criminally co-conspire to contrive and stage propaganda and violence events.Don’t waste your time. Just sit back in your easy chair and allow the propaganda news of the day to mess with your status quo political correctness minds: 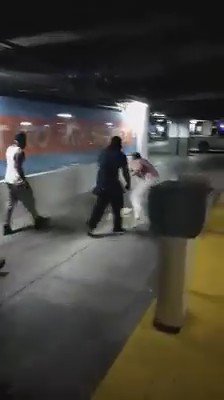 The actors are wearing carefully-crafted costumes and there is sensational story (with a grainy 45-second video) about a young White guy being dragged – and stripped – by a handful of Black kids in a parking garage. Nothing much happened in this scene, but the Twitter post claims that the White guy was “begging for mercy.”

Mind you, there was NO actual beating, the White guy was not really hurt, and the scene looks staged and specifically acted out for the camera.

A large part of the Black versus White civil unrest stories has specifically to with the BLUE LIVES MATTER movement. This is a serious divide-and-conquer tactic that pits Soros-backed Black Lives Matter (#BLM) against the Police (Blue Lives Matter).

These HOAX news stories, where cops are featured killing Black people, are being put in play to generate a widespread demand for BLUE LIVES MATTER laws in every state. The BLUE LIVES MATTER movement identifies Black Lives Matter as the threat.

There was a petition, signed by thousands of citizens and sent to the White House, to label the Soros-backed agitator group, BLACK LIVES MATTER, as a “terrorist” group in mid-July. POTUS rejected the BLUE LIVES MATTER petition.

So these HOAX shootings of Black men by Police have more than one goal:

Generating widespread rioting nationwide to justify the declaration of a “national emergency.” (for Martial Law).

Identifying BLACK LIVES MATTER as a “terror” group so as to continue to stir the pot of racial hatred.

See the grainy video of a White guy being dragged and stripped by really young Black kids inside a parking structure. Really looks staged for the camera, and NO ONE WAS HURT.

Furthermore, the first ten minutes of a Russianvids exposé video reveals that the “police” guns show no recoil or smoke, and the so-called shooting victim was not shot, but rather, reached into his van to get a blood packet to use in his staged “shooting.”

Related to the above:

Note below the “overkill” crock of BS video allegedly taken by the supposed victim’s wife. Note how the woman contradicts herself. Note that she is too far concerned taking an erratic (non-convincing) video rather than rushing over to stand by her TBI stricken man. Note how she sticks to her crisis acting script, – “he better live.” Ask yourself: “How much did the couple get paid for their crisis acting parts? Did the video break your emotional heart-strings?” Or, will it help cause you to question, think, examine and evaluate?

Source of the above 3 minute video: Victurus Libertas – youtube.com/channel/UCnFxU-3nW6XAAQfHkOFMalA/videos

“A thinking person will question what he hears; examine what he sees; and evaluate what others would have him believe. When did big government and its mainstream media tell the truth, the whole truth and nothing but the truth?” – [Pastor emeritus Nathan M. Bickel]