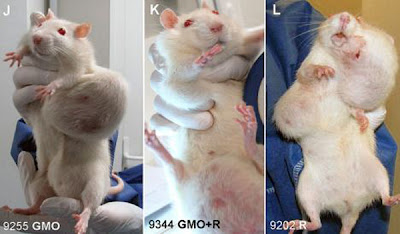 These are images of rats that have been consuming genetically modified corn with trace levels of Monsanto‘s Roundup chemical fertilizer. Studies have shown that this has caused the rats to develop tumors, extensive organ damage, and premature death.
This is the conclusion from a new study that looked at the long-term effects of consuming Monsanto’s genetically modified corn. This is something they never do before releasing it to the public.

A few bits from the study:

The study was published in The Food & Chemical Toxicology Journal
The study was led by a man named Gilles-Eric Seralini from the University of Caen and it was the first ever study to examine the long-term effects of eating GMOs. Ya I know what your thinking… WHAT? Ya… First Ever. Normally you would expect the food be tested and approved for long-term effects but no.
– Obviously and literally – “Ain’t no body got time for that”

Some quotes from the report:

“The animals on the GM diet suffered mammary tumors, as well as severe liver and kidney damage. The researchers said 50 percent of males and 70 percent of females died prematurely, compared with only 30 percent and 20 percent in the control group.”

“Scientists found that rats exposed to even the smallest amounts, developed mammary tumors and severe liver and kidney damage as early as four months in males, and seven months for females.”

You might want to think twice or even thrice before buying your next set of shopping.
Want some sources? Sure you do –
http://www.thegrocer.co.uk/topics/technology-and-supply-chain/monsanto-weedkiller-and-gm-maize-in-shocking-cancer-study/232603.article
How about another? http://www.dailymail.co.uk/sciencetech/article-2205509/Fresh-fears-GM-foods-French-study-finds-rats-fed-controversial-crops-suffered-tumours-multiple-organ-failure.html
The international journal of biological sciences:
http://www.biolsci.org/v05p0706.htm
And if you live in California – Prop 37 is still pushing to label these foods:
http://www.carighttoknow.org/
0 0 votes
Article Rating
Subscribe
Login
Please login to comment
0 Comments
Inline Feedbacks
View all comments