Well yesterday’s mail held a surprise, a letter from Aetna.  Granted I get letters from the insurance all the time telling me  “this was covered, this is your responsibility, etc,” but yesterday was just plain rude. 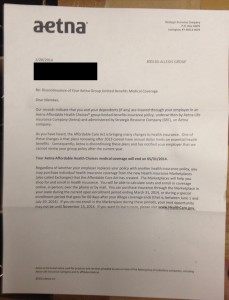 After being a solid employee, taking care of my responsibilities and always doing the right thing, I received a cancellation notice from my company insurance.  You see due to some “inadequacies in it’s dollar limits on certain procedures” it was no longer viable under the Affordable Care Act.

What the hell?  That’s just good business and I understand it.  It’s currently covering what I need, when I need it and I’m perfectly fine with it.  So here’s my steaming  gift from the POTUS and his cronies…my insurance cancellation is effective 5/31/14 and I’m forced to shop for other insurance.  What happened to the “if you like your health care plan, you can keep your health care plan?”  “If you like your doctor, you can keep your doctor”.  Liar, liar…

So here’s the fall out, regardless of what happens, I’ll have to find some alternate insurance for 6 months until the election happens.  I’m not happy about it, but I’m thankful we have local insurance programs and I don’t have to use the security and billing nightmare sponsored by the idiots on Capitol Hill.

Furthermore, there’s the new Shared Insurance program that I just heard about.  A group of christians are supporting each other and paying each others bills as they are able…talk about a blessing.  The Medi-Share program was covered by Fox just recently http://www.foxnews.com/politics/2014/03/03/christian-alternative-to-obamacare-growing-fast-as-deadline-nears/

What’s not lost on me is it’s long before the elections…guess what?  If many others are getting these now (remember this is a company sponsored plan), the elections in 2014 are a slam dunk.

If you received a cancellation, feel free to email me a picture of it at rlowery@rlowery.onmicrosoft.com and I’ll start posting them here, prominently, so that the idiots in the Senate that claim we’re all liars , like Senator Harry Reid (Senate Majority leader) who can see first hand that we aren’t lying and yes, we’re pissed off…I have a few other choice options for the Senator, but for now, this is enough.  You can also call me at (972) 665-8230

We should be calling for a repeal of the bill, in total, without exception and a rollback so that people can manage their own healthcare, keep their plans, keep their doctors and most of all, not be paying ridiculous fees and charges that have nothing to do with our individual health care.  We can leave the medicare provisions for the lower income individuals that qualify and we’ve solved the problem that should have been the solution from the beginning.

What say you folks?