The Bug Out Bag 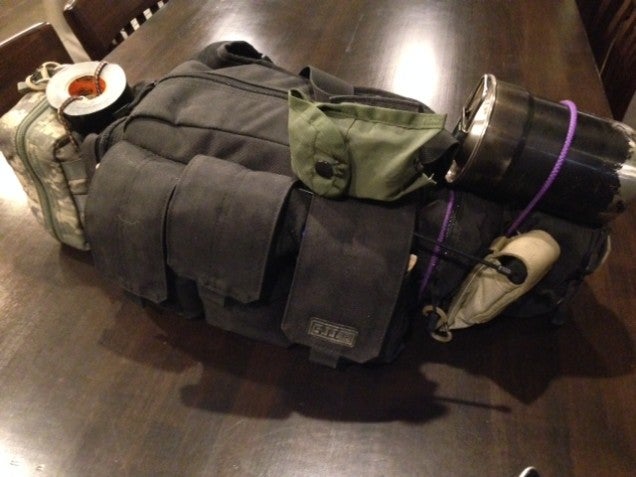 Most of our go bags only borrow the name, featuring the things we like to carry on a regular basis. Reader Scott Kelley takes his gear a little more seriously and has a “bug out bag” system that’s versatile and geared towards survival.

Scott posted a ton of detail on his Kinja blog, so rather than summarizing it and missing out on much of the good stuff, we’re republishing the whole post here. Check out everything he’s currently doing below.

If you have a great go bag with a useful organization scheme and great features, let us know! You can share your bag by posting it to your personal Kinja blog using the tag featured bag or adding it to our Lifehacker Go Bag Show and Tell Flickr pool. Photos must be at least at least 640×360. Please include information about your bag, what you put in it, and any relevant details about how you made it awesome. If yours catches our eye, we might just feature it! 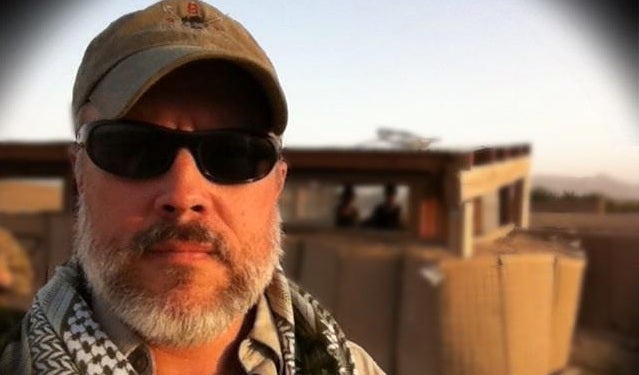 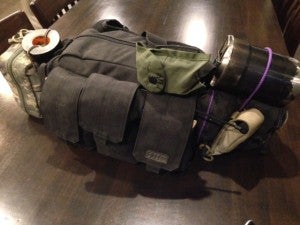 There are a lot of different things you can put on your bug out bag list and there’s not really one list of contents that you should follow. Each item in your kit will depend on your skill set and what you’re trying to prepare for. It’ll also change depending on your region, the season and how likely it is that you’ll have other gear available to you while you’re out.

I’m currently redoing my whole kit so I figured I’d let you know what I currently have and then update you with how I change things. At least this way you’ll have a decent idea of what one way is to pack a bugout bag.

Currently, I have my system in five (six) major parts:

I live in Phoenix, AZ so my kit will reflect that. Especially with the snow recently throughout the rest of the country, my pack would be absolutely different if I didn’t live here.

Today, I’m just going over what’s in my go bag. You could also call it a bugout bag but that gets confusing with my main pack so I changed their names. It’s really a question of semantics anyway. I purposely kept it small and light and can easily pull out a couple things If I really need to. It’s not a full-on 72 hour bag that you may expect unless you combine it with the backpack.

I’m in good shape overall for an old dude that started off the Army in the Cold War (usually run my Army 2 mile in the 13’s or 14’s) but I don’t hike or run as much as I really need to.

Without water, my pack is about 13-14 pounds and I carry 96oz of water in it for a total of about 20 pounds wet, plus my EDC and whatever else. My go bag has items I’d need to survive for a short time. It could also be a get-home bag really, depending on where I’m at when I first need it. It has a survival kit and medical kit in it. It’s designed for temporary self-rescue because when I’m expecting to be somewhere that I’d have to live in the bush for a while, I’d bring my main pack or my INCH bag if I could. As with everything, it’s a compromise. I could live off just the pack if I really needed to but it wouldn’t be optimal. Much better than being caught with just my EDC though.

Since I’m redoing my main pack to support search and rescue with the Sheriff’s Office better (the current most-likely scenario that I’d find myself having to survive on my own for a few days, if I get separated during a search somewhere until they come get my dumb ass), I’ll post that in a separate article later. Then you can see how the system all fits together. Your bugout kit should be a bugout system, starting with your EDC and working its way up to everything you have at your bugout location and have stashed along the way.

This is a real-time snapshot of what’s actually in my pack as I’m sitting at Starbucks drinking my Zen tea. As you’ll see, because I haven’t gone through the thing from scratch in a while, it’ll need some adjustments here and there.

The bugout bag itself

Currently, my pack is a 5.11 bail out bag. I chose it because it’s a shoulder bag. This allows me to add a backpack without it getting in the way and also reach my weapon. This bag is super tough and pretty much the perfect size but I’ll be changing it at some point. I’d like to carry just a tad more (I’m not really a fan of hanging anything outside of the bag unless it’s something secured tightly and I need it immediately like ammo). It’s also a bit too tactical-looking for my taste so it makes me stand out as it is. In 99% of cases, that doesn’t make any difference and may even be an advantage in certain scenarios. If I were caught on my own in a societal collapse or similar, it could be a problem. In that case, I’d drape a light jacket over it on my shoulder and start looking for an acceptable replacement. In the meantime, I’ll wait until I find just the right bag. It’s hard to find a rugged incognito bag in the right size that isn’t several times more expensive but you always need to be improving your fighting position. This one works for now and isn’t designed for fully bugging out by itself anyway but I could if I had to with it. 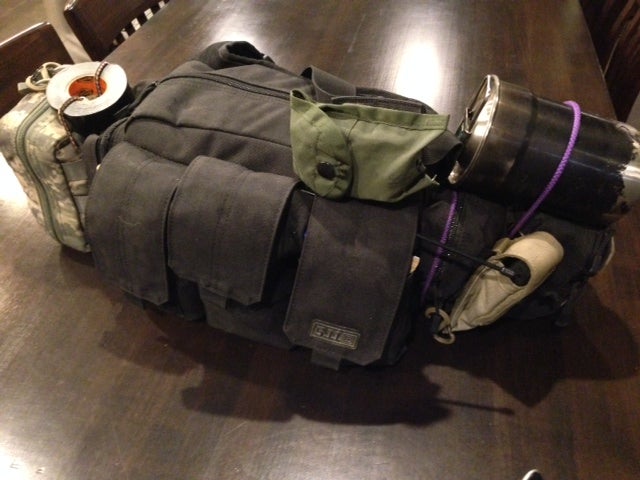 Bug out bag contents – outside

So what’s in the bag? First, let’s look at what’s on the outside of the bag. 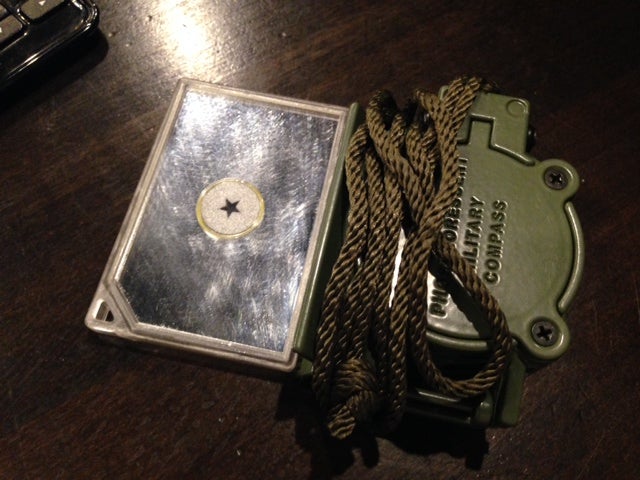 I’ve attached a compass pouch to the shoulder strap. This pouch holds my Army-issued tritium lensatic compass and a rescue mirror.

On the zipper pulls, I have: A figure 9 caribiner to tighten a 550 cord for a shelter. I lost a few of them so I need to get more. Having 2 is pretty nice to tie up a tarp for a small shelter. A small keyring flashlight that came with one of my care packages I got in Afghanistan is attached to it. 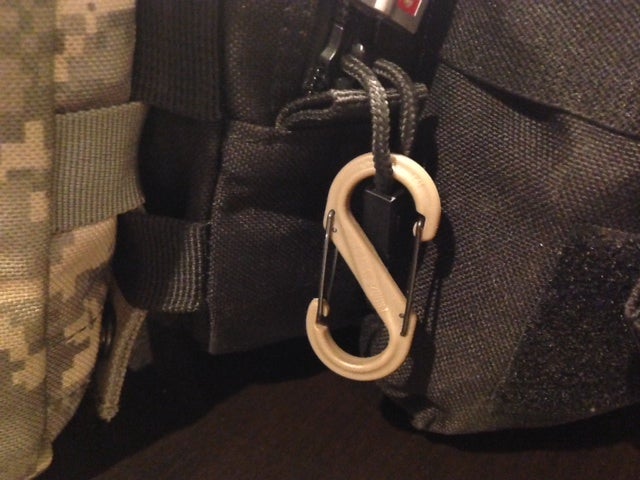 A few small S-biners to clip things to.

Strapped onto the bag with a couple of bungee cords are: 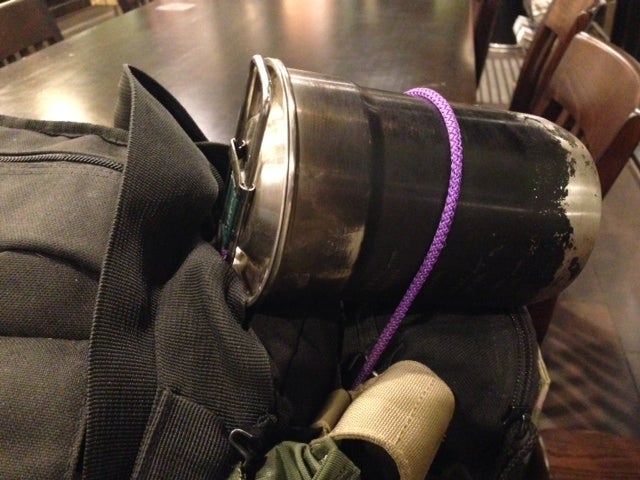 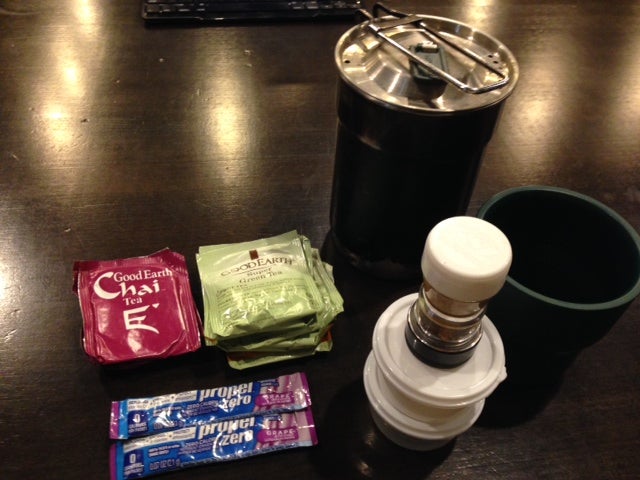 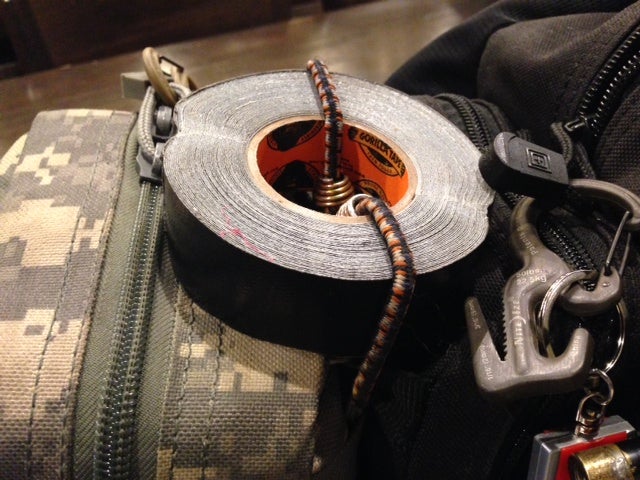 As I’m going through this, I notice that my earplugs aren’t attached to the bag so I’ll have to find them. They’re great for sleeping in a noisy environment or saving your ears in a gunfight. I’m also missing my sleeping eye cover thingy. Sometimes you need to sleep in the daytime and move at night and that really helps. Plus, it weighs almost nothing and fits anywhere.

Strapped to the molle on the outside of the bag is: A Gerber multi-tool that came with one of my Army weapons cleaning kits a few years ago. 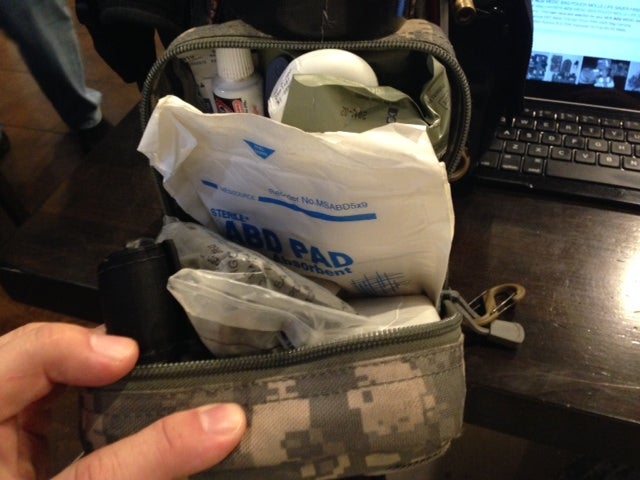 An older Army-issued IFAK (Improved First Aid Kit) is strapped to one end of the bag. I’ve swapped out a few items in it and added things like:

On the other end, I have a small molle pouch that fits just right without being too bulky. In this pouch, I keep:

A 12v charger for the ham radio I have in the bag. I have the radio and power supply in separate bags because that’s how they fit best but I don’t really like doing that. One of the things I’ll be doing when I redo this bag is putting them in the same location.

Two spare AA batteries for the flashlight in the bag. My main pack has a solar charger for rechargeable batteries but I have two non-rechargeable ones in this bag because they hold their charge longer when not being used. 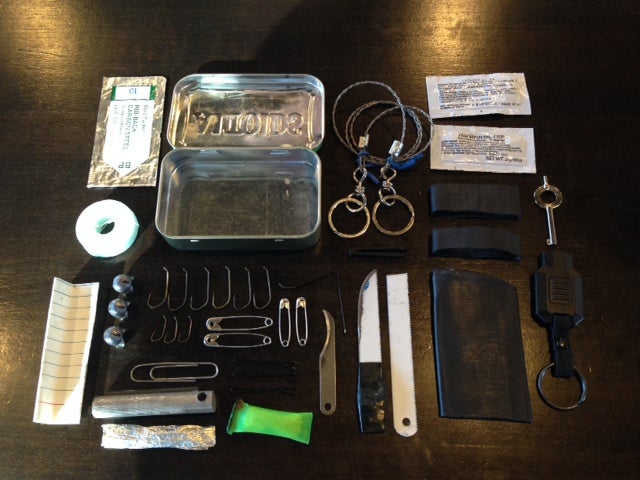 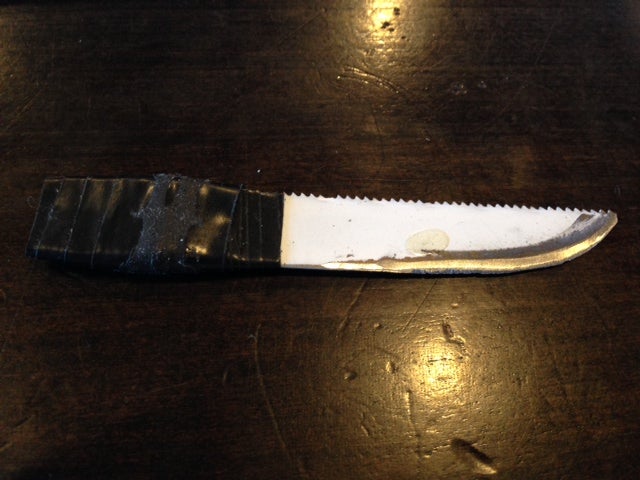 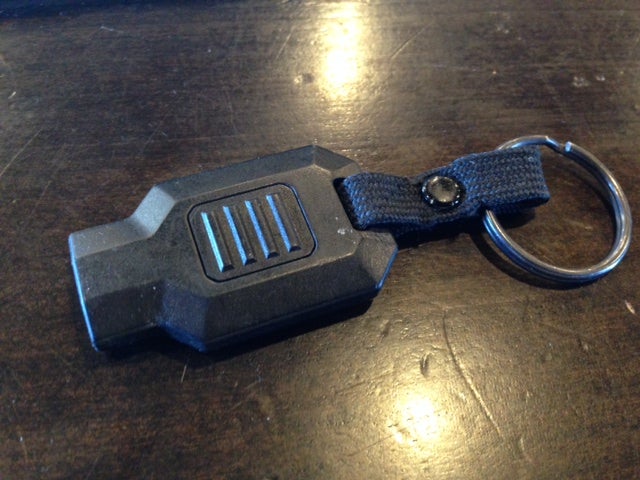 The bag itself has a main pocket, three front ammo pockets, and a pocket on each end. 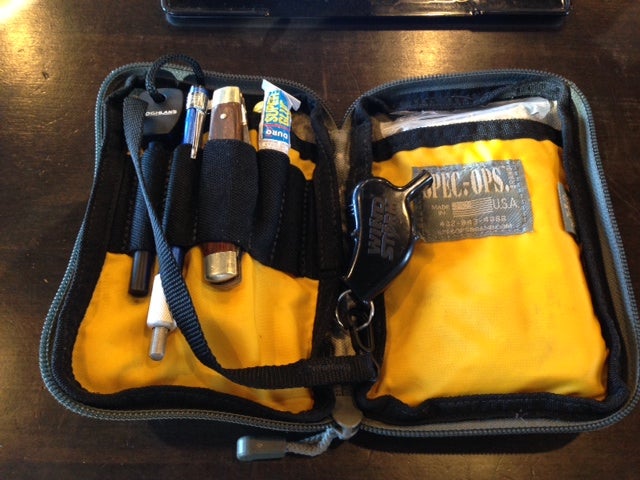 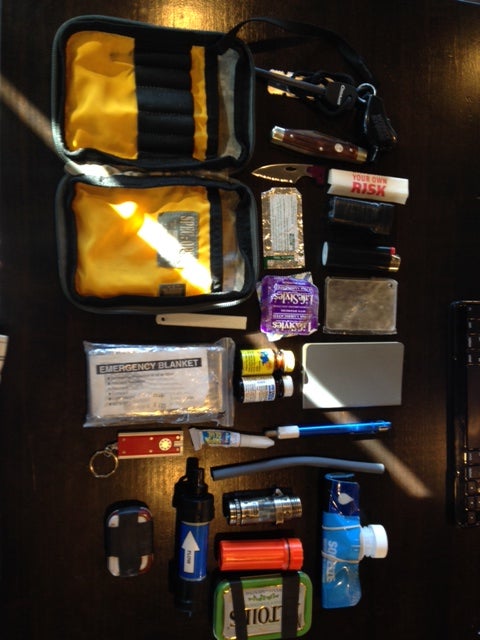 In the first end pouch, I have:

I’ll be adding some potassium permanganate to the kit as soon as I figure out exactly how I want to carry it and what I want to use with it. It’s great for starting a fire, even in bad weather. Here’s a video to show you what it can do:

In the main pocket, I have:

The three ammo pockets in the front contain:

So as you can see, it’s still (and always) a work in progress. I really want to try to keep all the survival stuff in one section and medical in another etc but it’s kinda hard to make that happen. I have it set up though so that if I had to drop the pack, I can reach in for a few things quickly. I’d rather have it so I didn’t have to think about what I wanted to grab. 20 pounds doesn’t sound like much but it gets heavy after a while, especially if you add extra water or other gear.

What’s in your bug out bag?