What’s in the Vax?

Several sources have provided scientific information on the contents of “what’s in the vax” including known toxins.  Take a few minutes educate yourself and share with family and friends.  This appears to be closer to a planned extermination event and not a health event.  The Vax is also being used to setup a transactional system via the central banks to control where you spend, what you spend and how you spend your money.

Here’s the links to the Vaccine death reports by manufacturer:

Also if you’re looking for a definitive list of what’s in the concoctions, here ya go “Jab Ingredients Reactions”

Documentation about children is now coming out, warning this is hard to see

Ivermectin works…it’s been proven, a safe, effective medication against parasites (this virus fits that) and has been patented over 70 years ago.  Do not be deceived.  You can find it on indiamart.com if your local provider won’t give it to you.  Pre-emptive treatment is Vit C, Vit D, Selenium, Zinc and Magnesium if you dose up on those you’ll stand a good chance of being healthy and avoiding this to begin with.

Tucker Carlson reveals a powerpoint from the U.S. Army justifying vaccine mandates with a slide that says “How many children were sacrificed to Satan for the vaccine?” along with listing the 7 tenets of Satanism

Midazolam was used to prematurely end the lives of thousands who you were told had died of Covid-19 and we can prove it; here’s the evidence…

Here’s why the data that the CDC, NIH and WHO are wrong 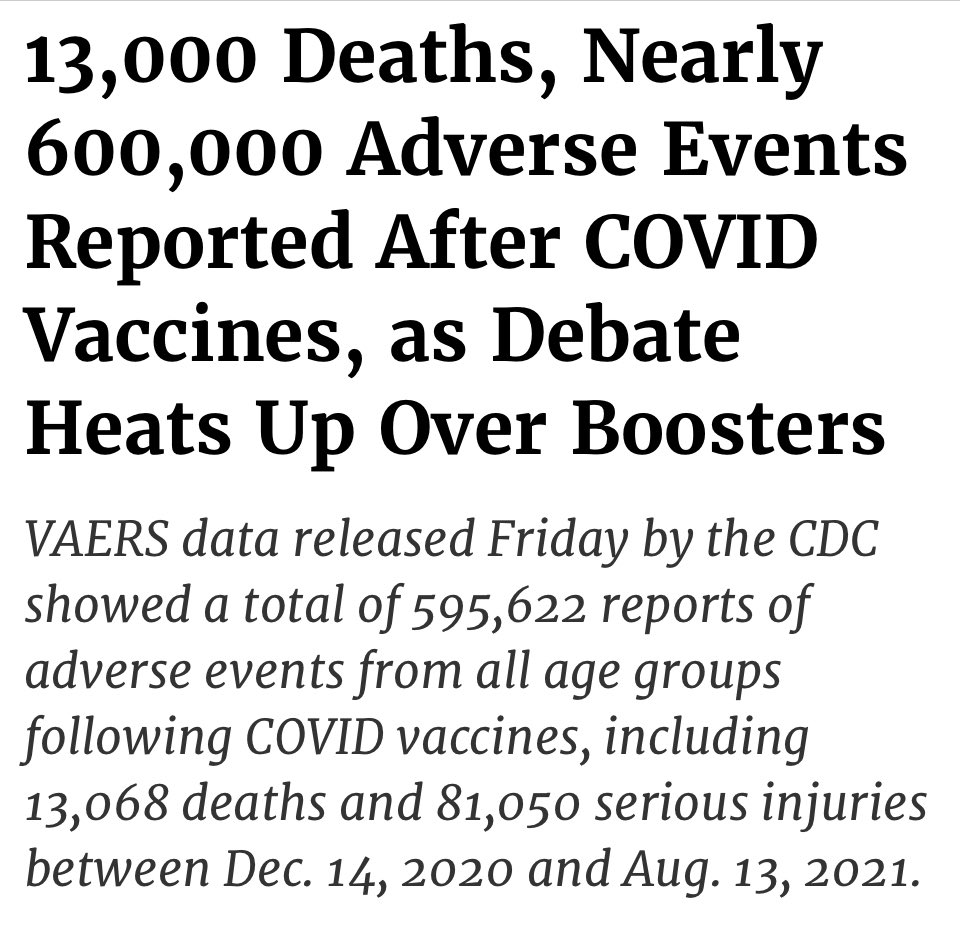 Also, if you’re interested in learning about the reported issues (reporting is optional) you can visit the Adverse Reactions Database on the CDC site here https://www.cdc.gov/vaccinesafety/ensuringsafety/monitoring/vaers/access-VAERS-data.html 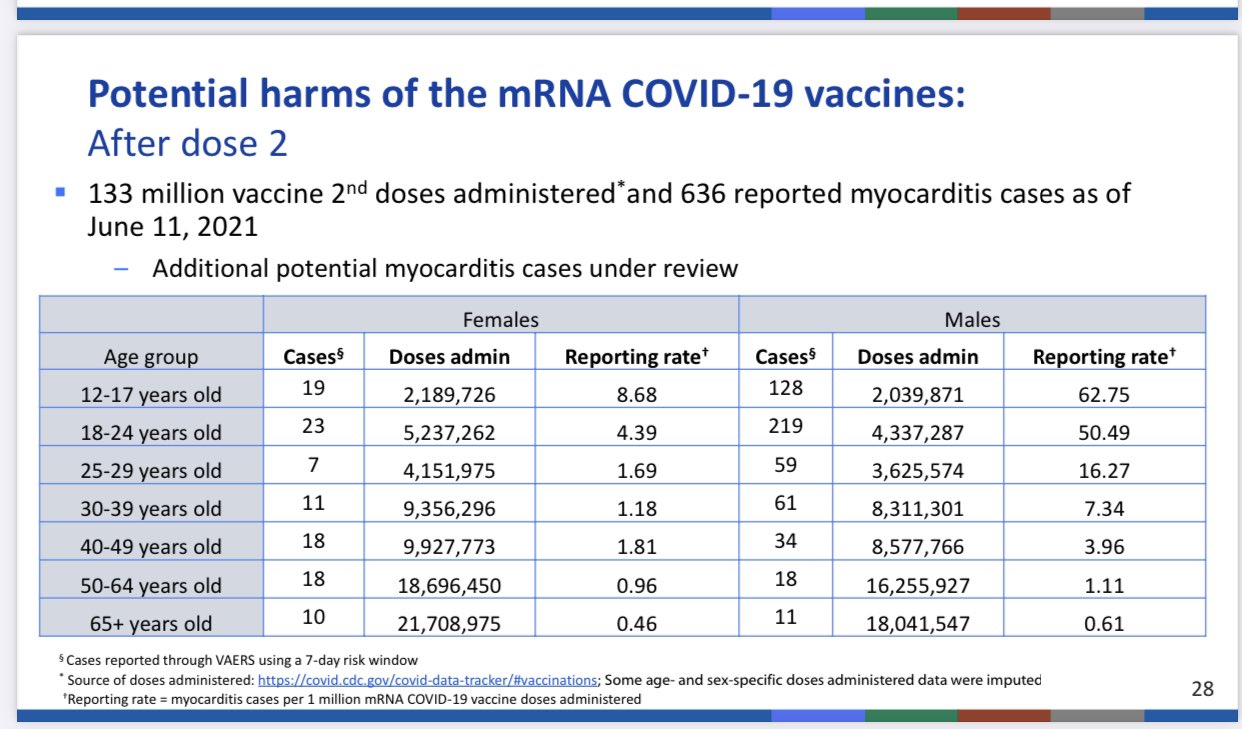 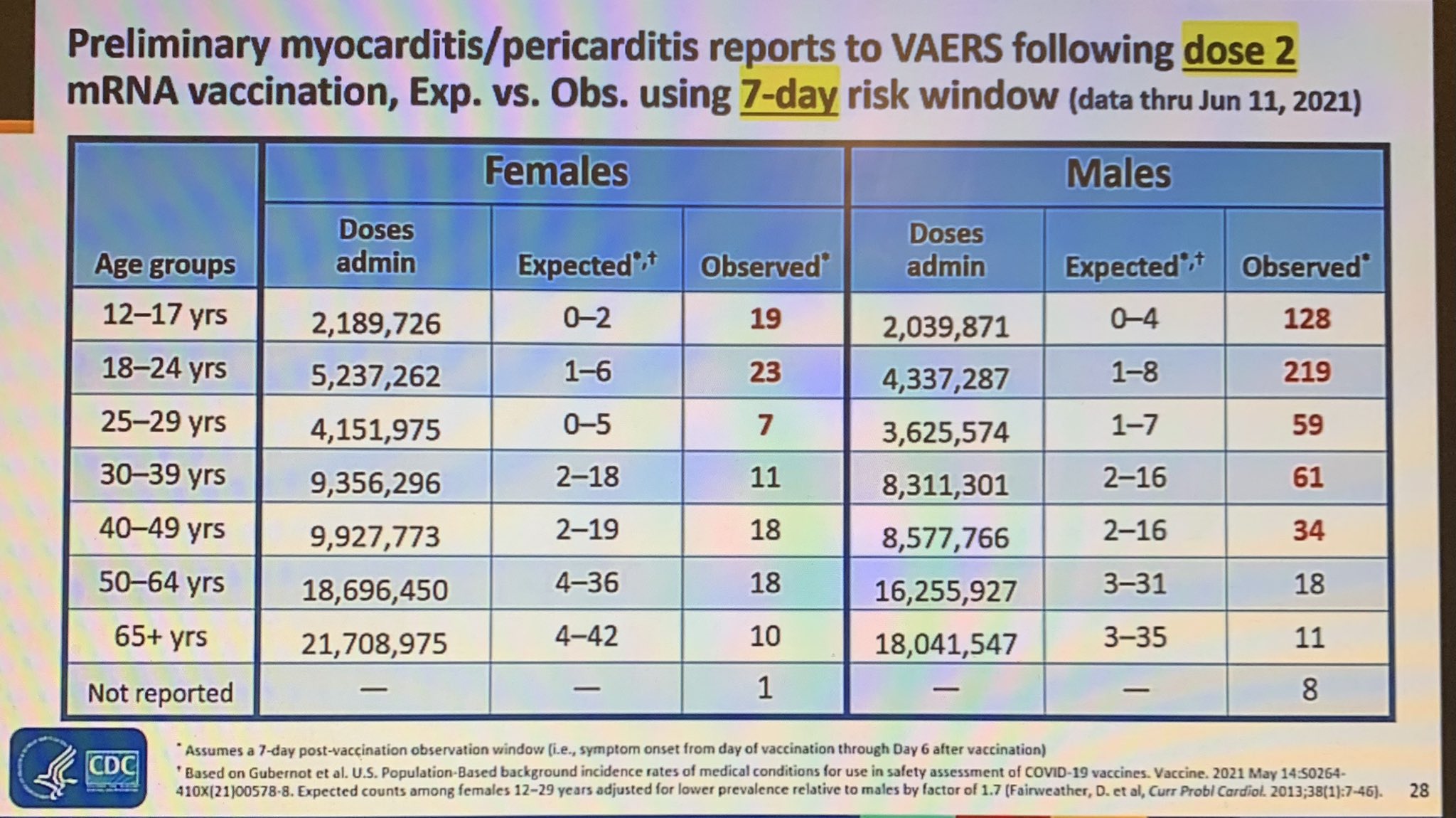 A new documentary recently was released called “Unvaccinated” feel free to view.  It covers a lot of information, that is in addition to our clippings below. You can download and view at your leisure.

The videos below are for educational purposes.

Why there’s no hospital beds available

A message from a man who regrets his decision

A message from a daughter of a nurse, Willow Rose

People dropping from masking and vaccinations

The Grimm Reaper, couldnt be plainer to get people to ask questions, but they are not

Another warning from another individual

A warning from a religious individual

The new banking system is part of the vax system, hard to believe, but that’s why BillG was involved in it, it’s technology embedded into people to control your spending, movement and behaviors. 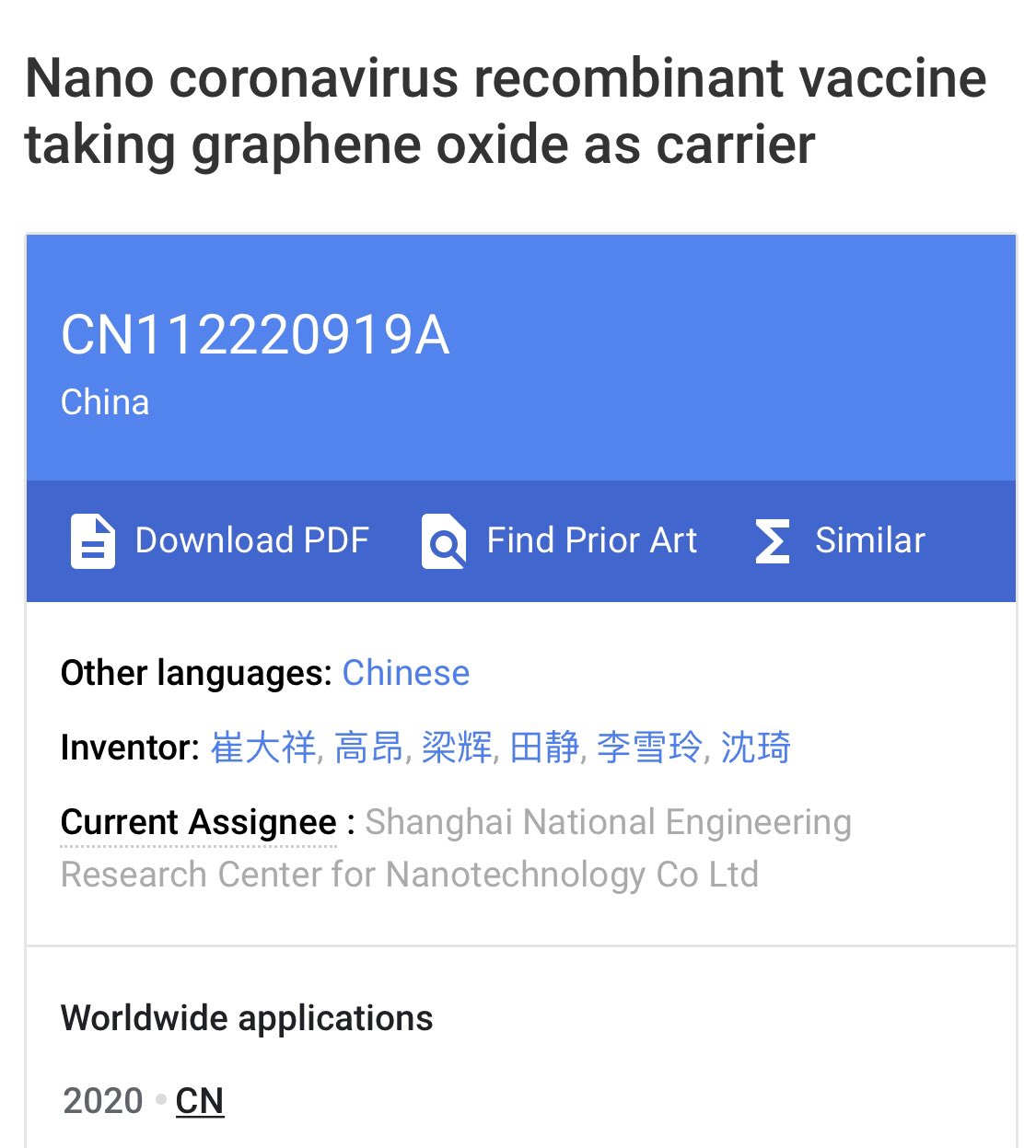 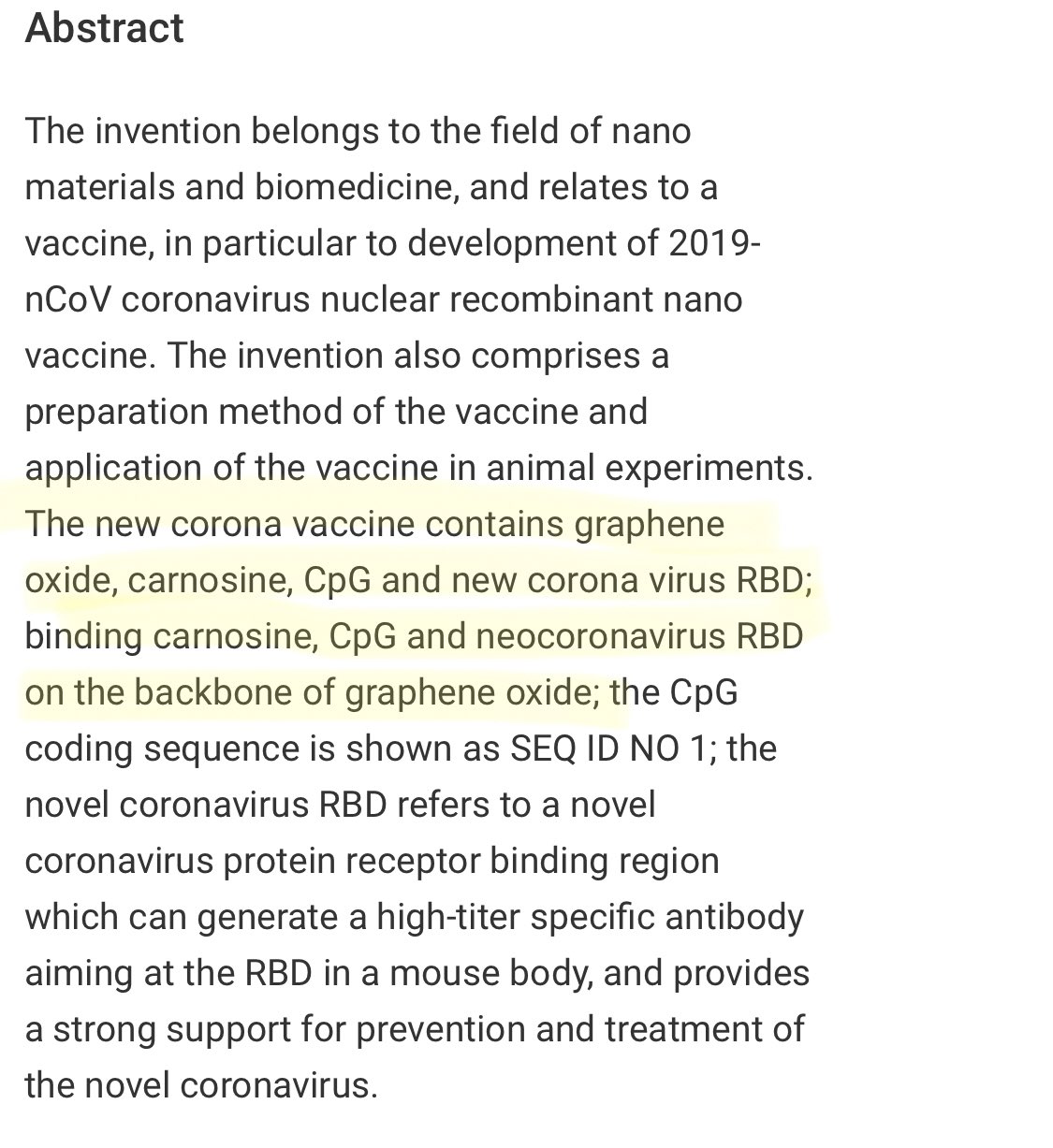 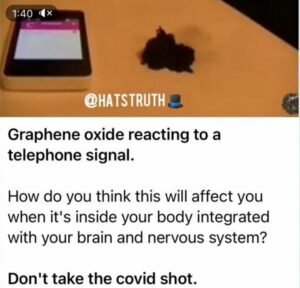 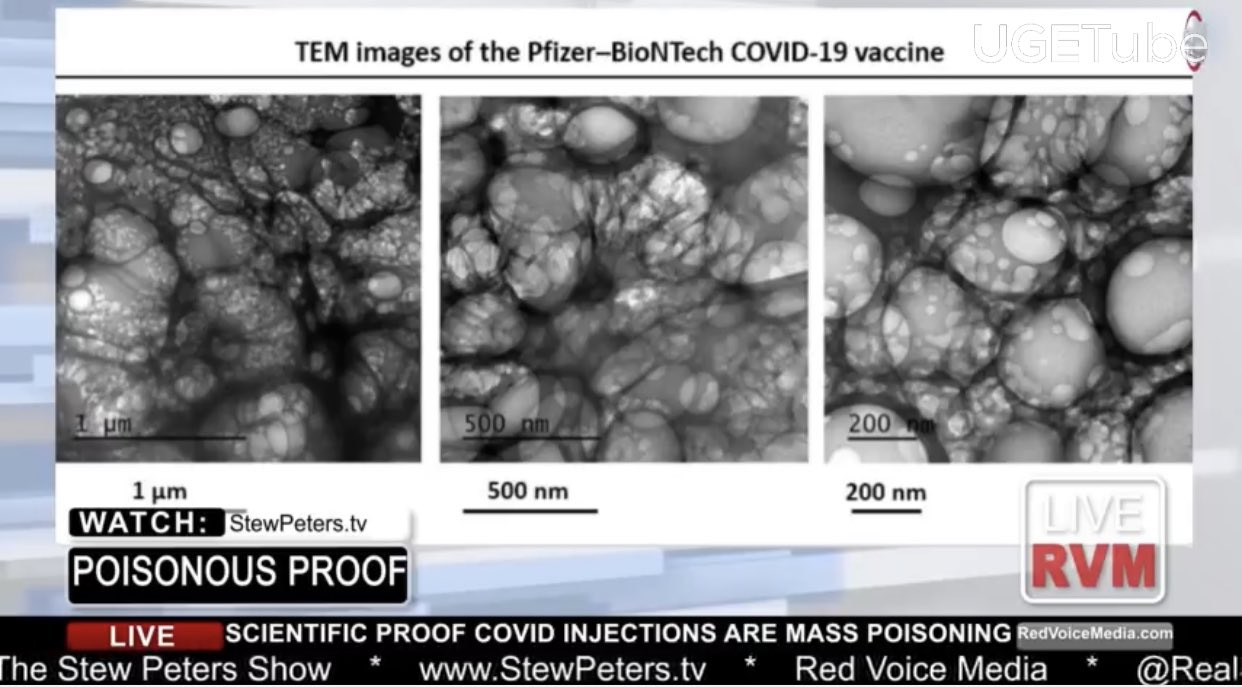 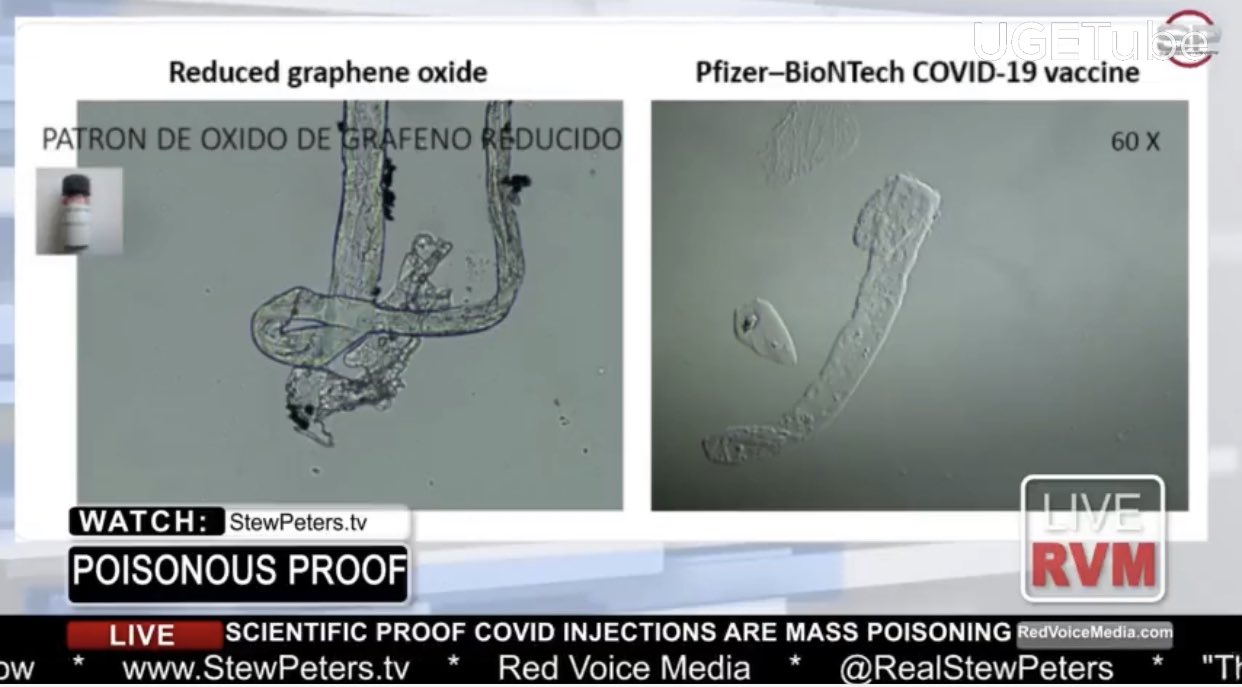 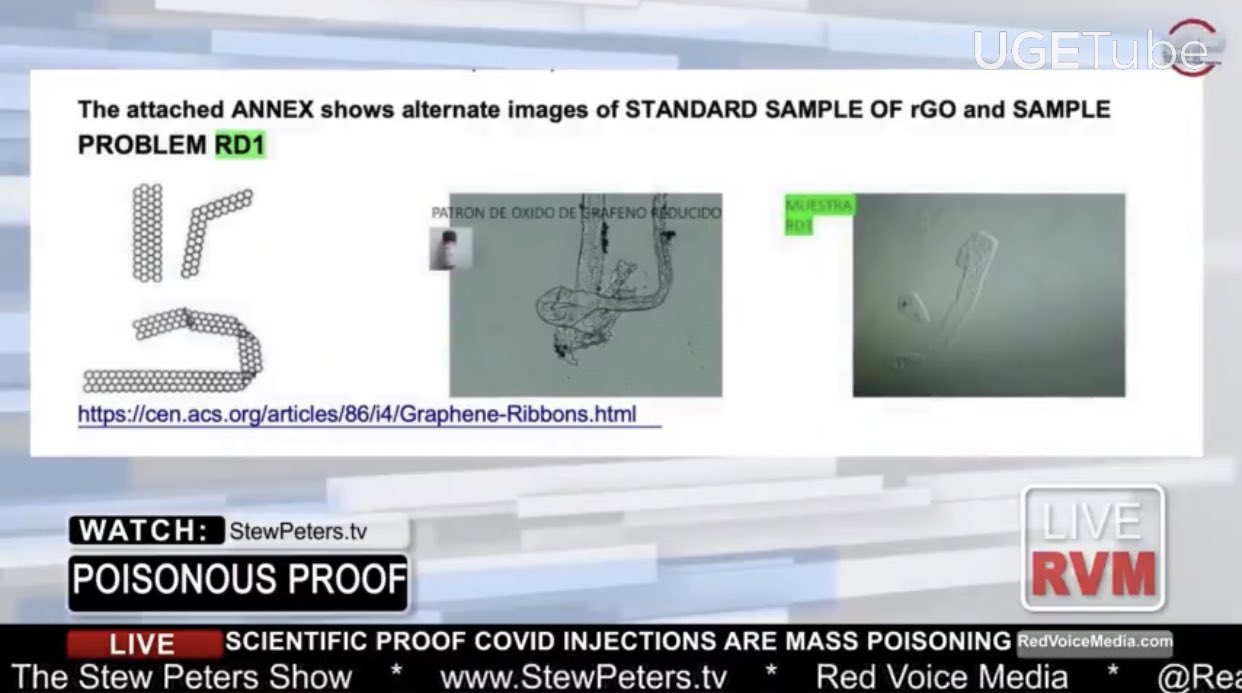 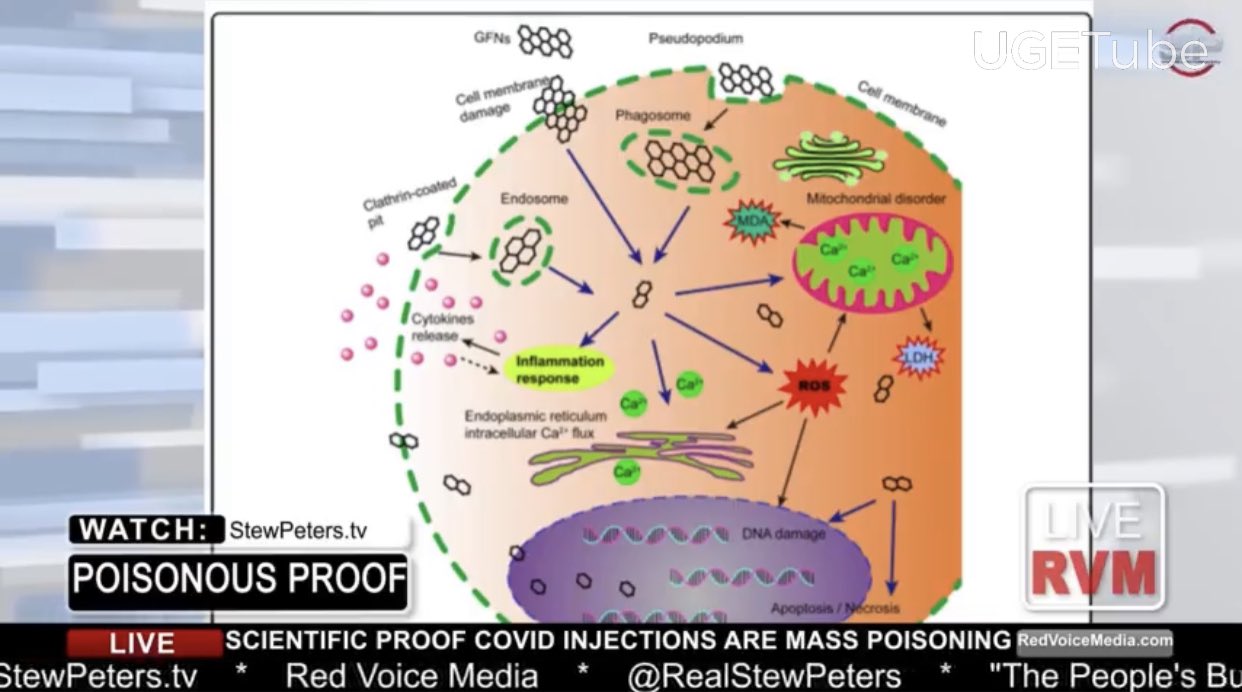 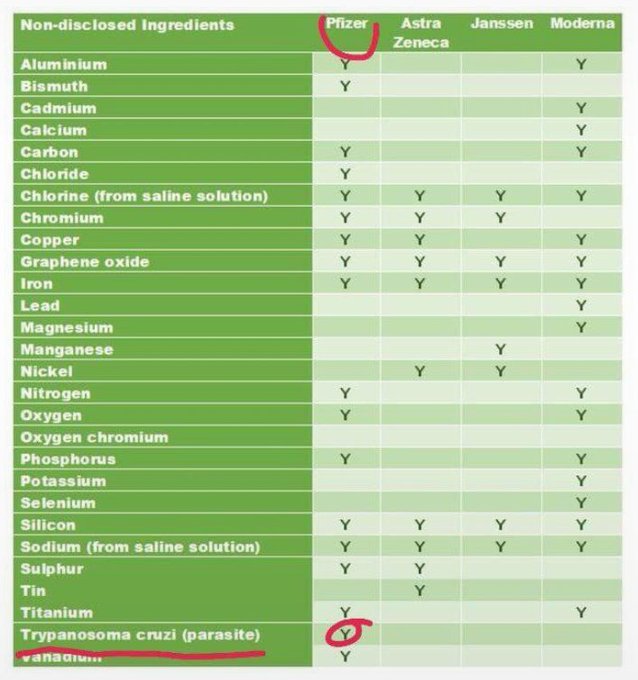 Only 1% of events are being reported, validate the data at VAERS and you’ll see this is accurate, so the reality is far more bleak than this alludes to 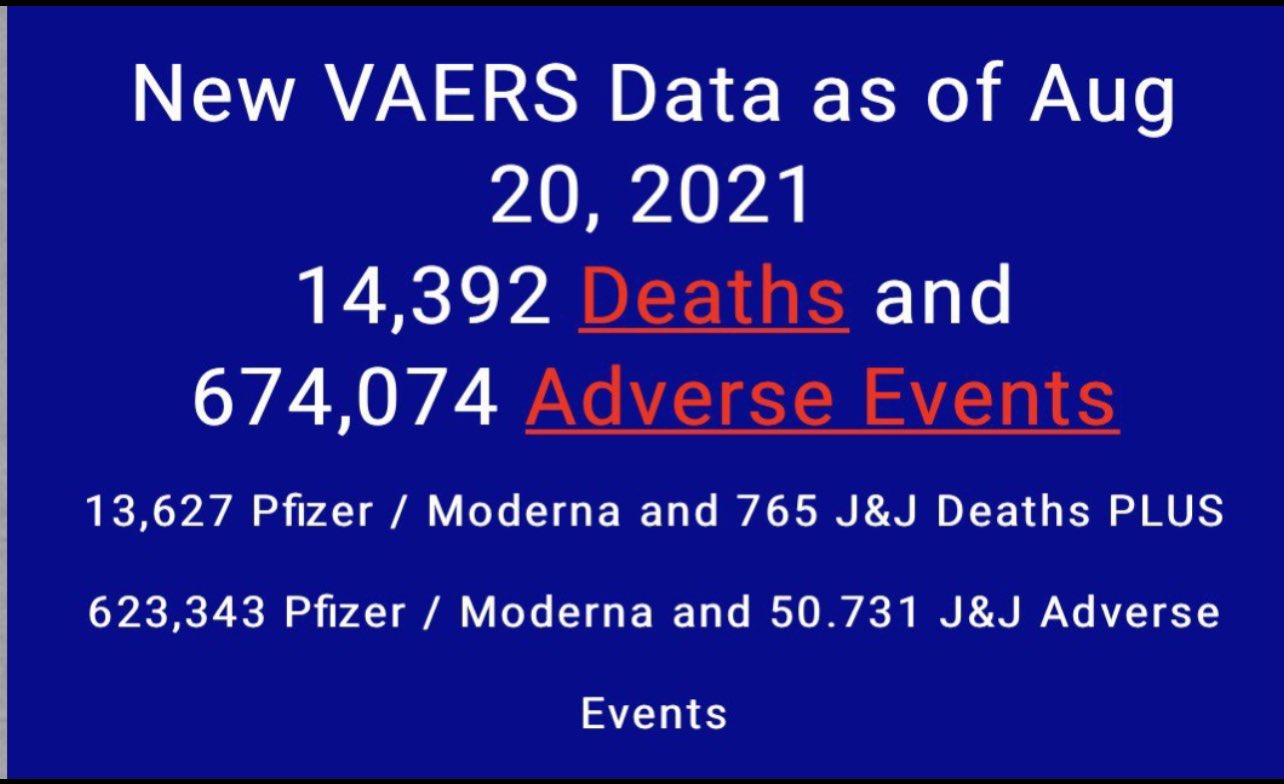 Keep in mind they are using crisis actors to compel you to vaccinate, here’s just a few 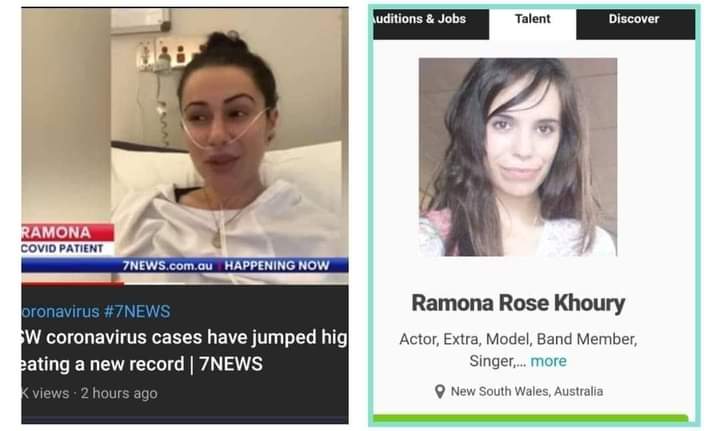 Keep in mind this is NOT the definition of a healthy individual.  She has comorbidity factors through the roof, so don’t believe the MSM bull 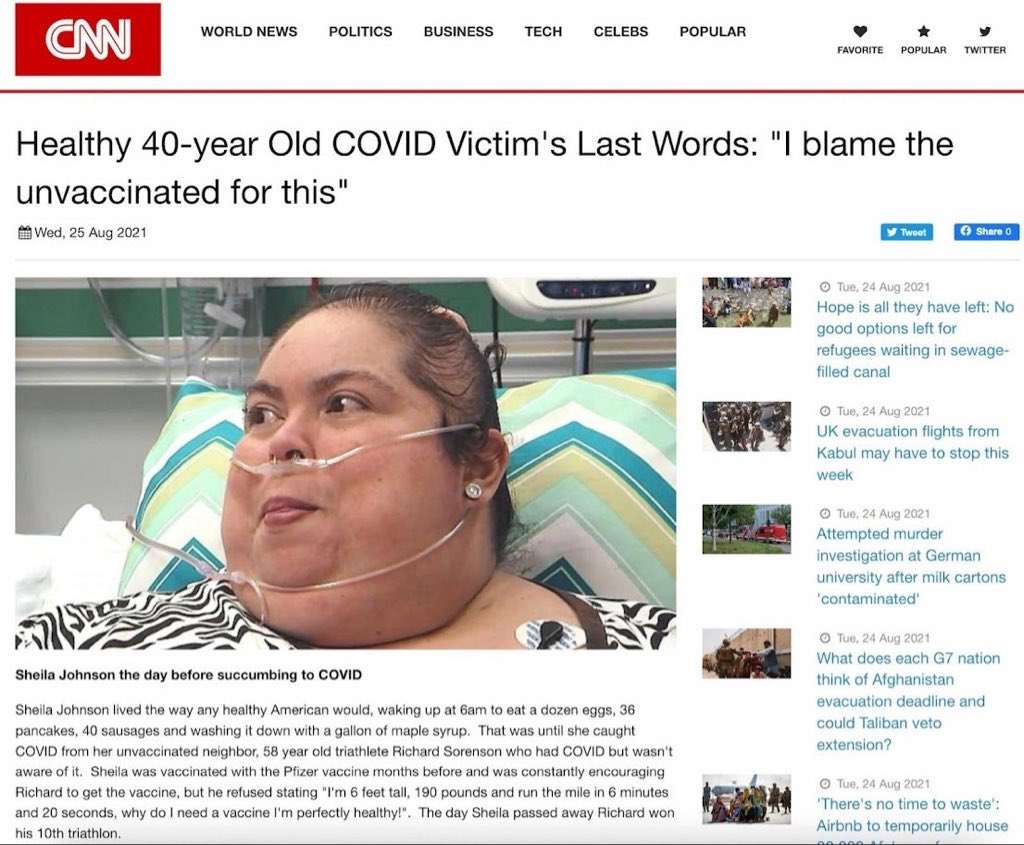 Anyone on a ventilator would normally be sedated to keep the choking/gagging reflex under control.  this is another crisis actor 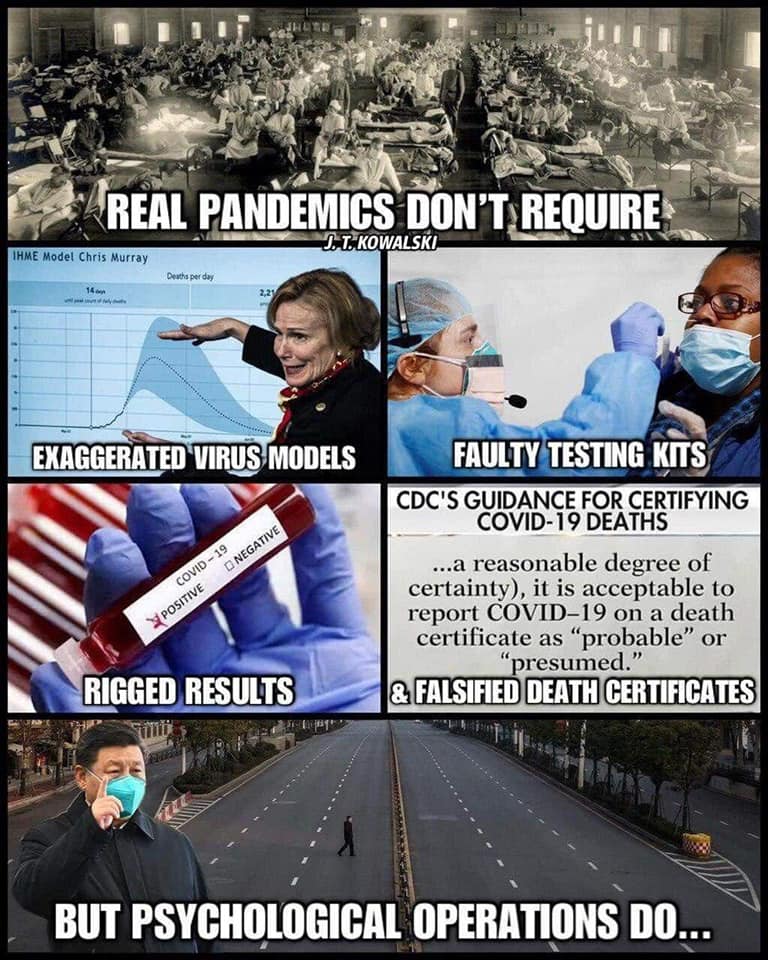 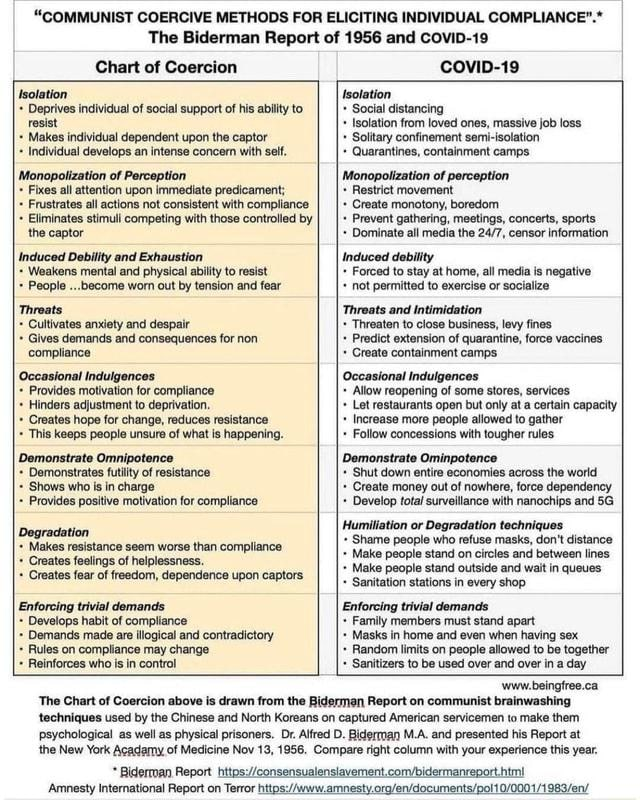 The most highly cited physician on the early treatment of COVID-19 has come out with an explosive new video that blows the lid off the medical establishment’s complicity in the unnecessary deaths of tens of thousands of Americans.

Dr. Peter McCullough said these deaths have been facilitated by a false narrative bent on pushing an all-new, unproven vaccine for a disease that was highly treatable.

He said COVID was a bioweapon and the vaccines represent “phase two” of that bioweapon.

“As this, in a sense, bioterrorism phase one was rolled out, it was really all about keeping the population in fear and in isolation and preparing them to accept the vaccine, which appears to be phase two of a bioterrorism operation,” McCullough said in a June 11 webinar with German attorney Reiner Fuellmich and several other doctors.

“Both the respiratory virus and the vaccine delivered to the human body the spike protein, the gain of function target of this bioterrorism research.”

Most of McCullough’s comments come in the first 10 minutes of the below video.

“Now I can’t come out and say all this on national TV today or at any time,” he continued. “But, what we had learned over time is that we could no longer communicate with government agencies. We actually couldn’t even communicate with our propagandized colleagues in major medical centers, all of which appear to be under a spell, almost as if they are hypnotized right now.”

He did not hold back in his criticism of his colleagues in the medical community.

“And doctors, good doctors, are doing unthinkable things, like injecting biologically active messenger RNA that produces this pathological spike protein into pregnant women. I think when the doctors wake up from their trance they’re going to be shocked to think what they’ve done to people.”

McCullough is professor of medicine and vice chief of internal medicine at Baylor University and also teaches at Texas A&M University. He is an epidemiologist, cardiologist and internist and has testified before the Texas State Senate related to COVID-19 treatments. He holds the distinction of being the most widely cited physician in the treatment of COVID-19 with more than 600 citations in the National Library of Medicine.

In the video, recorded by Oval Media, McCullough said:

“The first wave of the bioterrorism is a respiratory virus that spread across the world, and affected relatively few people—about one percent of many populations—but generated great fear.”

He said the virus targeted primarily people over 50 with multiple medical conditions. It poses almost no risk to children.

He said 85 percent of the more than 600,000 U.S. deaths could have been prevented with a multi-drug treatment given in the early to mid-point of the disease.

Instead, people were told to stay home and not return to the hospital unless their symptoms got worse, such as severe breathing problems. By then it was too late for many. They were placed on ventilators and died.

The vast majority of doctors jumped in lockstep to follow these erroneous “guidelines” handed down by the World Health Organization and the U.S. Centers for Disease Control. Those guidelines neglected to place any focus on the treatment of sick patients and, from the beginning, as early as April 2020, started emphasizing the need for a vaccine as the only real hope of beating back the virus.

The federal Vaccine Adverse Event Reporting System [VAERS] logged 5,993 reports of deaths of people injected with the COVID vaccine between Dec. 14, 2020, and June 11, 2021. That’s more than all the deaths reported to VAERS from all other vaccines combined over the last 22 years.

But these numbers, as shocking as they are, don’t scratch the surface of the actual number of dead Americans, said McCullough.

“We have now a whistleblower inside the CMS, and we have two whistleblowers in the CDC. We think we have 50,000 dead Americans. Fifty thousand deaths. So we actually have more deaths due to the vaccine per day than certainly the viral illness by far. It’s basically propagandized bioterrorism by injection.”

McCullough added that “every single thing that was done in public health in response to the pandemic made it worse.”

He said the suppression of early COVID treatments, such as hydroxychloroquine and especially Ivermectin, “was tightly linked to the development of a vaccine.”

Without the suppression of the already-available treatments, the government would not have been able to legally grant Emergency Use Authorization to the three vaccines rushed to market by Moderna, Pfizer and Johnson and Johnson.

In the case of Moderna, the U.S. government is co-patent holder through the National Institutes of Health, a clear conflict of interest.

“I published basically the only two papers that teach doctors how to treat COVID-19 at home to prevent hospitalization and death…If treated early, it results in an 85 percent reduction in hospitalizations and death,” McCullough said.

So not only were the vaccines rolled out unnecessarily by suppressing already available, effective treatments, but the FDA and CDC are now covering up tragic numbers of deaths caused by their experimental mRNA injections.

McCullough said he has organized groups around the world that emphasize early treatment.

“Governments have actually tried to block early treatment of COVID patients, so we created a home patient guide,” he said.

“We broke through to the people, and the people who got sick with COVID called in to get medications from mail-order distribution pharmacies. So without the government even knowing what went on, we crushed the epidemic here in the United States towards the end of December and January. We basically took care of the pandemic with about 500 doctors and telemedicine services. And to this day we treat about 25 percent of the US COVID-19 population that actually are at high risk, over age 50 with medical problems or present with severe symptoms. And we basically handled the pandemic, and at the same time we’ve tried to keep ourselves above the political fray.”

McCullough said his focus has recently turned to the unnecessary and dangerous injections.

“We are working to change the public view of the vaccine. The public initially accepted the vaccine and we had to kind of slowly turn the ship. Now, in the U.S. the rates of vaccination have been dropping since April 8. Most of the vaccination centers are empty.”

“We have a lot going on in the United States. We are engaging more and more attorneys.”

There are two possible scenarios playing out:

The Placebo Vaccine – What’s interesting is it is possible that the Q team with Trump knew all this and made sure that a placebo was sent out to make sure no one was poisoned.  All of the data below about harmful vaccines is true if you had received an actual payload and yes we are receiving reports of crippling effects so it’s very likely.  The possibility could be it’s inert and won’t hurt you thanks to the team but do you want to take that risk?  This is why the NWO is saying more shots, more jabs, because they’re expecting people to die from the jab and they’re not.  Welcome to check with checkmate around the corner. This has been verified with Pfizer inserts as well as Moderna https://www.bitchute.com/video/65bnLS3FssAQ/

The Willful ignorance issue – By providing inserts with nothing on them the providers are telling you go ahead and take the risk we’re not telling you what’s in it.  As a result we have all these reports of crippling effects.  People need to own the results knowing they never asked what was in it, trusting Big Pharma to not poison them, only to find out they are.

You choose which scenario is playing out, right now we don’t know, but based just on evidence it’s likely the latter.