Skip to content
Home / Our Interview With a First Responder

Our Interview With a First Responder

The first responder that I spoke with a few months ago has given us permission to post their interview as long as we remove their name and the company they worked for. The following is the complete question and answer we had over the course of a few days. 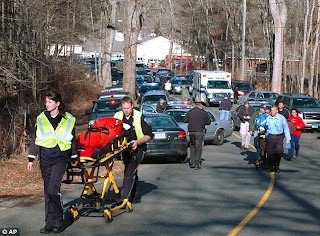 What is your position with the company? I am a 6th year EMT with **a mobile response unit from a neighboring town**
Where were you when you got the call? My partner and I were just checking in after dropping off a patient in Danbury.
Do you recall the call that came in? It said we were requested at Sandy Hook Elementary for a possible multi-victim shooting and that we were requiring a police escort.
How long did it take you to get on scene? There were multiple emergency vehicles enroute and the traffic was actually fairly light so we were able to get to the fire station within about 7 or 8 minutes.
What happened next? My partner and I were directed to park alongside Riverside Road at the corner of Sunnyview Terrace. After we parked we got our gear and started to run towards the school. We were escorted by 2 sharpshooters and they were wearing what appeared to be military gear. They had no markings on their clothes to signify who they were. I assume they were from the military.
What did you see at the school? We did not make it to the school yet. As soon as we got to the fire station, we were stopped and we both had to produce our identification and they wrote our names down in a book and sent us back to our rig and we were told that we were not needed. We were told by a female to wait at the rig until someone came to get us. About 30 minutes later we were called on the radio and instructed to meet someone named Lisa at the rear of the fire station. We went to the fire station and we were immediately met by a woman who I assume was Lisa and asked once again to provide our identification. She took our identifications and went around the back corner of the fire station. She returned about one minute later and gave us our identification and asked us a few questions. She asked us if we had any types of recording devices. I thought that was very strange. We were then asked if we had cell phones. We both said that we did have cell phones. We were instructed to turn them off as they might interfere with radio transmissions near the school.
Would you recognize Lisa if you saw her again? Of course. Her behavior was very strange. Everyone’s behavior was strange. It was like we were in a movie. It didn’t seem real. I have seen photographs of her many times. She can be seen in the helicopter footage. She was wearing a very bright yellow overcoat.
What was everyone doing at the fire station? There were a lot of people shuffling in and out of the side of the station. There were many people crying, but it was fairly quiet. The crying was more like sobbing and it was eerily quiet.
How long were you at the fire house before you went to the school? We were there no longer than 4 or 5 minutes and then we were escorted by a group of policemen towards the school.
You are saying that you were on the scene no more than 8 minutes after the initial call and then you sat in your truck for another 30 minutes and then you spent another 5 minutes at the fire station? Yes. That is correct. I estimate that we were there for close to 45 minutes before we were allowed to head to the school.
In the 30 minutes that you sat in your truck what did you see and hear? The sounds were actually very low. We could not hear anything. We had the windows rolled up because it was cold and we had the rig running. We saw a lot of people walking down the road and there were parents arriving to pick up their kids. There were a lot of emergency personnel on scene. My partner made a remark that there were more emergency people then there were civilians.

If you had to guess, how many children would you say that you saw in the entire day? It had to be a couple hundred.

What did you see when you finally got to the school? We were not allowed to go near the school. Once we got to the parking lot, they told us that emergency response was no longer needed.

What was the scene in the parking lot like? There was a lot of confusion. There were so many police and military personnel and they were walking all around. It seemed like they didn’t really know what to do. My partner asked if there were any victims and he was told that there were children. He asked how many and he was told there were at least 30.

Did you ever see any of the victims? No. We were only in the parking area for about 5 minutes before we were told we had to evacuate the area as they were still securing the area. We thought that was strange because they let us in already. Why would they let us in if the area was not secure?

Were they talking about the school? No. They were doing a search of the parking lot and the surrounding wooded areas. They had dogs and there were 3 helicopters that were searching. They made all of the emergency personnel leave the scene and return to the fire station. We were told to wait at the fire station until we were called. We waited for another 30 minutes. They never called us.
Did you see anyone get taken away in an ambulance or a police car? There was one police car and two Advanced Life vans that left the scene in code. They had their lights on. But we never saw if there were victims inside.
Did you see any broken windows or bullet holes? There was a car window that appeared to be smashed in the parking lot. We were not close enough to the school to see if those windows were broken.
Did you see any blood? No.
Did you see any evidence at all to suggest this was a real shooting? I have been in 3 previous emergency preparedness training exercises and this is what I thought it was. I honestly thought that we were part of a drill but we were not told about it in order to make our reactions seem real.
Do you think anyone was killed at Sandy Hook Elementary? My heart says yes. But common sense and my own two eyes tell me that something really strange went on that day. I still have nightmares about what I might have seen had I been allowed inside.

Have you ever questioned anyone about it? I tried a couple of times. I wrote a letter to our captain and he never wrote back. He finally called us into his office and told us it was best to not ask questions or discuss the events that transpired. The only reason I reached out to you is because I KNOW that something is not right. I have a hard time sleeping and my partner has since moved. I have no one to talk to without fear that it will get me fired.
I really appreciate your time and if you would like to join the discussion or even answer a few questions you are more than welcome to stop by the page at anytime. Thanks. I have been watching the page everyday and I am amazed at some of the ideas that some of these people come up with. Being in this business and seeing what I have seen in the past 6 years is a real eye opener. We are trained to be observant. I think my observance got the best of me this time and I now question everything I see.