The Clock is Ticking

When Do We Get Our Country Back?

There are certain aspects of our elections we have to take into account as well as understanding where we are today.  When we throw in the aspects of what Nesara is attempting to do, we should also heavily balance on that side.

All of the negative necessaries have to occur under our current faux administration. There’s no way the uneducated masses would allow it any other way without riots and violence. So this administration is going to be here a while longer.

Nesara has a few tenants right away we should tee up, here’s a list to refer to: 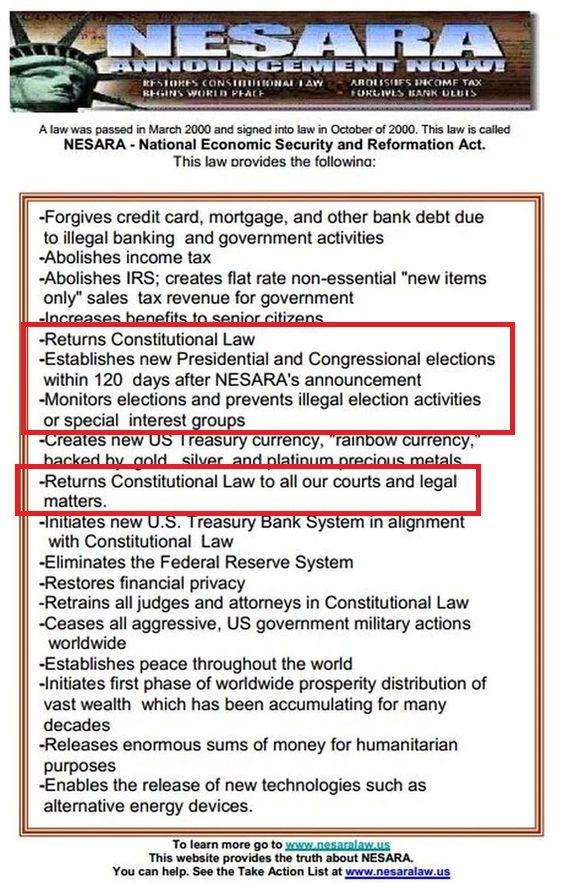 What We Have To Agree On

So we’re seeing a stockpile of goods in hundreds of tankers offshore our ports. This is by design. It is not because we don’t have workers, truckers or the ability to deliver it all. It’s because by driving shortages, they can squeeze the citizen into compliance. Having spent some time in 3rd world countries, not being able to get certain goods makes it uncomfortable at best and dangerous at worst. Things we count on from offshore these days include the very medicines that they’ve hooked us with in the Medical/Insurance/Pharma cartel. By now driving prices of these hard to find items, they are squeezing the very last out of our pockets so that when things are finally restored, we’ll accept whatever that is, as long as we get our goods.

The NWO is still planning their global reset which will indeed cause the financial systems to crash and allow them to establish their new system.  We also see signs just like 2008 and other crashes of the precursors to an imminent crash.  I for one am out of any position I’m not willing to lose it all on.  As long as the market has dark pools, closed door trading and other manipulations, you should always refer to the stock market as the casino. Keep in mind, the house always wins.

As someone that works within the financial system, I can see it quite possible that our “reset” will be sidetracked and a different type of reset will occur for the United States.  Again, when that happens is contingent on many events, but we already have reestablished and reacquired our foundational currency, gold during the last several years.

When we plug in our core currency that was abandoned 100 years ago, things will dramatically change.  The best word of advice here is buy gold and silver now, prepare while it’s on sale.  Should the USDebtClock turn out to be accurate, minor investments in these metals will land windfalls.

100 oz of silver at todays market price is about $2600 dollars, but once the reestablishment of our currency standard is in place, it is more likely to fetch about $308,900 dollars.  a monstrous 1000 fold return 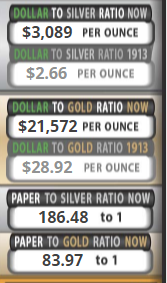 Similarly with Gold, our currencies foundation, an ounce today is about $1850 so a purchase of just once ounce can move you quickly to over $21,000/ounce.

The return on silver is far higher, the thing to keep in mind is silver has always been used for day to day transactions throughout history hence the higher demand. Gold is how you store your wealth. So if you want to prepare for the economy of the foreseeable future, investing in these metals as they have for millennium might be prudent.

I am not a financial advisor, do your own research, but remember, they can only manipulate prices for so long.  JP Morgan has been caught numerous times manipulating silver, its just a matter of time before that gravy train ends for them.

Who I use for ordering includes APMEX and JMBullion.  I do not have any interest in either of these firms, nor do I receive anything for a referral or sale.

Once the crash occurs, the new currencies will roll out, with the new reset valuations. Keep in mind, the rising prices you see today are a direct result of the Fed injecting 25% of our currency in use today, into the system over the last 18 months. So the more paper out there, the higher the prices go as long as there’s nothing to tie it to for a plumb line.

Those that are investing in currencies are counting on the Iraqi Dinar, the Malaysian Rupiah and the Vietnam Dong.  All of these have been subjugated and manipulated, when the revalue (RV) comes they will be a huge opportunity to collect a profit on those investments.

Once that reset has happened, currency/prices can optimally return to the 1920’s norms where we left the standard. A great comparison of this is my parents bought a house in 1964 for 30k, when my mom finally sold it around 2000, 36 years later, she received 15x that amount for the house.  Did the value change that much? No, it’s the devaluation of currency over those 36 years that made it price at that amount.

So think recalibration of pricing, incomes, etc. If you made a simple $10/hr which is about 20k per year, and prices returned to pre-1960’s you could easily buy a house, sustain your family, etc. The recalibration and revaluation of our currency against gold and silver will bring this about. More on this later, but do some history research about what an income bought in the 1930’s, then when we decoupled from gold (under Nixon) in 1971, the inflation we lived through where currency literally bought so little was rampant.

FDR outlawed owning gold in 1933. Why did he do that? Making people cash in their store of wealth for a dollar that could be manipulated by the FR is exactly what they did. At that point, they had you, lock, stock and barrel. Your wealth was what they determined it to be if it was priced in dollars.

Many of us were panicked thinking we were going to see justice last year prior to the inauguration day, but this is all part of the rollout.  Keep in mind, they have to commit the crimes all over again, because we don’t know who 44 pardoned prior to leaving office in 2016.

As such, they knew they were too greedy and would do it, so they set the monitoring traps, the auditing traps and more.  Even now, with smaller elections just this month, they sprung the trap on more corruption in states as obvious as NJ and CA.

We need to have a house cleaning, literally, in the House and Senate and that won’t happen until the 2022 midterms. People are waking up now, and as they get fed up, they will ultimately trigger a red tsunami nothing like the 2020 elections.  As a result, it will be insurmountable and undefeatable.

The election mechanism has to be corrected. We’ve already brought in blockchain to prevent this next time, but we did not have it the last couple elections that were subverted.  With that in place, there will be evidence (immediately) of tampering as well as obvious ramifications on exposure.

By reseating congress under just elections, we won’t have to go through ridiculous hoops to restore the balance of power. I predict once we have that election, there will be a massive fight (think of it as a dying gasp) from the corrupt congress fighting their loss of power. Once the new members are sworn in (top of January 2023) we will promptly see the overturn of the certification, the move for military guidance and takeover. So when that finally occurs, you will see a secure open transition to a military correction.

What The Military Must Do

Constitutionally, the military is set for an event like this.  From what we can ascertain, they came up with this plan quite a while ago, knowing how things were being corrupted and as a result, they have contingency plans for various side-tracks. The constitution has plans for this as does the 2016 revision of the Law of War

For anyone to say “trust the plan” we need to realize the plan is fluid. It’s not what some portray as a locked and certain thing.  Instead it’s an unstoppable force, hence the term NCSWIC and WWG1WGA. As such, with the contingencies planned for, the military can indeed intervene when the evidence is insurmountable. At that time, they will take over key functions of our governments in federal, state and local jurisdictions.

Remember the constitution and the amendments states plainly that the fed can not intervene in states business, but if fraud is involved in a states participation in federal business, it become a different matter. At that time, the “stopping the train” and “purging the line” is most called for and we will indeed see that soon. Dates are impossible to predict, but as we move along the other timelines it will become very apparent.

I would encourage anyone to search, mine and analyze what we have been shared, keeping in mind, until we have full transparency, we really don’t know if it’s information or disinformation. So be careful who/what you follow. You can get to the source at QAGG

All of the events above have to take place under the faux administration under the hands of adults in the room to prevent the leftist children from destroying our world and it’s economy and further enslaving it in the evil socialist and communist systems.

Mike Pompeo told us on inauguration day when we would get our POTUS back…his tweet was ignored by various providers/broadcasters even after being tweeted, messaged and mentioned in our own communications.

So this points us to the next open election cycle.

I know this isnt what people want to hear, but it’s the reality of what’s above. I won’t win any fan clubs, but you need to do what’s necessary to weather the remainder of this time and push for justice in everything. We’ve become a dumb and lazy country which is how this happened, so let’s fix it, time is short and if we’re to succeed we need to be on offense. Better that it takes a bit of time, than nothing at all and we lose our country.

I’m sure I’m forgetting some other points, so as I remember them, I’ll jot them down for another time.