Seattle Has Been Taken Over By The Department Of Homeland Security

(Montana Pike Hunter)  I’m writing to you today to bring light to share with you some curious things I noticed this weekend.

In order to put them into perspective, I must let you know a little about myself.  I was born in Seattle Washington and moved to Missoula Montana in July of 2001.  I still have friends in Seattle and I go there to visit yearly.

I went last year and observed a lot of peculiar infrastructure put in place, but nothing more noteworthy than the extremely sophisticated camera systems on the state borders.  This year I witnessed significantly more, a deterioration into an Orwellian setting that I never could have imagined.

Seattle is now informally under Federal Control.  Whether the local police and sheriff’s departments know it or not, they are being groomed to relinquish control to the Department of Homeland Security, it would appear that vast amounts of resources are being placed inside the city on standby.  I would have gladly taken more pictures, but given the circumstances, which I will explain later, I was unable to.

Picture 1.  What you see here first, is a homeless man who got drunk and took a dive into the concrete.  What you can’t see to the left of the picture by the arrow, are 3 Department of Homeland Security vehicles which I will show later.  That’s right, our counter terrorist force is responding to domestic disturbances.Shown in the red oval, is a DHS operative,  clearly displaying “POLICE” on the back of his type III-A body armor.  A clear difference compared to the domestic officer pictured in the green oval, who is wearing the typical type II armor.  Also, observe his badges and identification obviously present on his left shoulder – clearly absent on the DHS official. 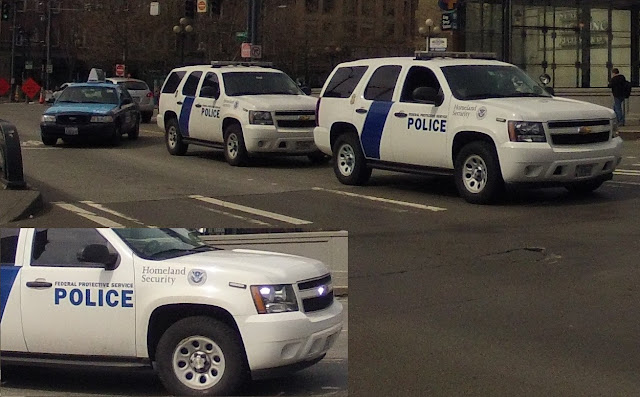 Picture 2.  Shown here are 2 DHS vehicles which are portrayed as standard police vehicles, but upon closer observation are shown to be Federal Agents, and this is where things got uncomfortable.After taking these photos, the two DHS vehicles began to follow us down the block, circling the block several times that we were walking on and then slowing to a creep while passing us while they stared us down.  The close up photo was taken on their second pass.  This made my girlfriend very intimidated and unhappy, and I began to take less obvious pictures of them since we were on vacation, and this trip was about relaxing, but I was too puzzled by their blatantly  overwhelming presence.

These vehicles are EVERYWHERE in Seattle, making rounds on any particular block about every 10 minutes, driving in caravans as long as 6 vehicles, but mostly in twos and threes, and always in an aggressive fashion.  Speeding, sudden stops, unnecessary acceleration, and clear traffic violations.  The frequency with which I observed these actions while eating a long lunch in a local restaurant as well as while walking through the streets was startling.  I would say it might be a training exercise if it weren’t for their interaction in insignificant events like drunk bums and medical emergencies.

Picture 3.  The third photo shows another obscure medical emergency with 3 DHS vehicles present.  2 vehicles are obvious, the third is behind the white truck.  Once again, our counter terrorist force is responding to heart attacks or whatever else might be happening in this photo, which took one ambulance and one stretcher, Clearly a minor medical emergency.Are the 1.6 billion rounds starting to make more sense now?  they’re grooming and placing assets where they need them first.  Ever heard of the massacre at Hue, south Vietnam? on January 31st of 1968, the N. Vietnamese were able to go inside this city in the early hours of the morning and execute every single South Vietnam sympathizer without error. in one night they were able to pinpoint every household where they lived, pull them out and kill them.  at the time this seamed improbable, how could they organize this? informants, data systems, and useful idiots that thought something like that could never happen. And then it happened.  With the internet, Facebook, and other electronic resources in place, and others being put in place, I think it’s pretty clear what is going on, get ready Patriots, we’re in for the long haul.
0 0 votes
Article Rating
Subscribe
Login
Please login to comment
0 Comments
Inline Feedbacks
View all comments